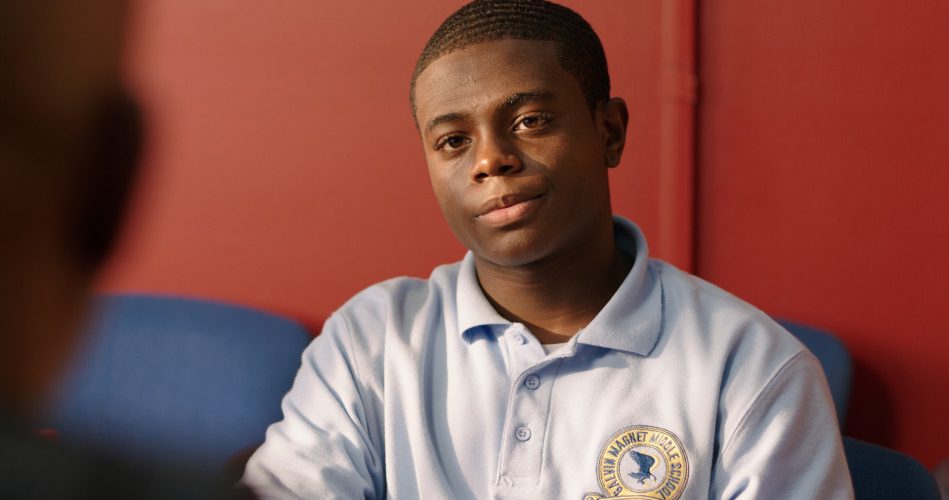 Oscar Award-winning screenwriter Tarell Alvin McCraney empowered students to be their authentic selves during a recent screening of his OWN series, “David Makes Man,” at WHUT on Howard University.

McCraney co-wrote the 2016 film “Moonlight” and has received numerous awards for his work. He currently serves as chair and professor at Yale University’s School of Drama.

The show is centered on a 14-year-old prodigy from a troubled neighborhood who is haunted by the death of a close friend and on his hardworking mother who relies on him to find their way out of poverty. David must choose between the streets that raised him or the higher education that may offer him a way out.

Set in South Florida, the series is loosely based on McCraney’s own experiences. He explores issues of childhood trauma and a reliance on imagination to survive.

In an exclusive interview with 101 Magazine, McCraney addressed topics such as “double consciousness,” letting students be themselves and, of course, his debut television series.

“This is a show about the imaginative world of an unapologetically black young man, and I think that’s unique,” McCraney said.

“You’ve never seen the interiority of unapologetically black folks. At least not in my lifetime,” he continued.

“David Makes Man” resonates with many people, and Oprah Winfrey even described it as “poetry on TV.” Eric Ruffin, associate professor in Howard’s Department of Theatre Arts and co-coordinator of the acting program, had a similar reaction to the series.

“Both the text and the filming of it, for me, was just poetry,” said Ruffin who viewed the pilot episode with dozens of students and interacted with McCraney in a Q&A session.

Akili McDowell, Alana Arenas and Howard alumna Phylicia Rashad are among some of the stars in the cast. The acting and cinematography captivated and grabbed the audience at the screening. Viewers laughed, gasped and followed along as cast members took them along on their journey.

After the screening, senior film major Alexsis Simmons said that she was “definitely interested in the rest of the show.” Simmons also noted that the show was different from what she expected.

Many in attendance were eager to see what direction the series will go in next. From the blurred visions that David experiences to the unexplained encounters with neighborhood residents, “David Makes Man” keeps viewers guessing.

“I’m excited to learn and dive into another work by McCraney,” Simmons says. She is a fan of McCraney and cites the Yale School of Drama as her dream graduate school.

“I enjoyed the range of questions from students and professors,” Anegbeode said.  “I could tell the people that came, including myself, really cared about [McCraney’s] work. … I appreciated how personal his answers were.”

The issues addressed in “David Makes Man” spark a broader conversation about telling stories for the black community. One can sense the authenticity in the series through the language used and imagery captured on screen.

“Young people need to be able to see that this thing is attainable,” Professor Ruffin said. “Having young people see how this man is shaping individual and collective conscious, that he is rendering visible all of these people, black peoples, young peoples, who weren’t rendered visible 20-25 years ago.”

After completing works like those of McCraney, one could assume that he would want all of his students to be like him. Rather than encouraging students to follow in his path, McCraney advocates for students being true to themselves.

Shayla Farrow is a reporter for 101Magazine.net.