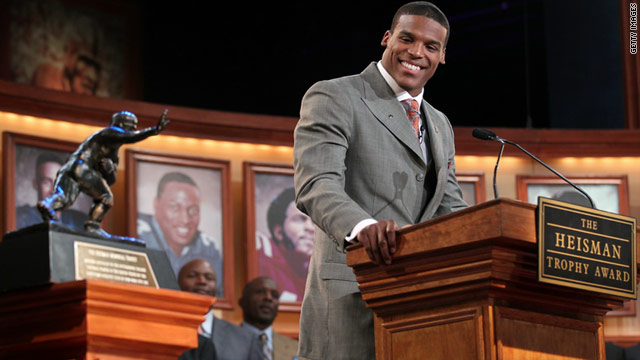 Newton ran home with the 76th Heisman in a landslide vote, receiving 729 of a possible 886 first-place votes.

“Who would have ever thought a person from College Park, Ga., would get an award with such prestige and tradition,” Newton said. “I thank God every single day for giving me the ability to play the great game of football.”

He accounted for at least four touchdowns in eight different games this season, and his 20 rushing touchdowns in a single season ranks second in SEC history.

“I know the entire Auburn family joins me in congratulating Cam for winning the most prestigious award in college football,” said Auburn Athletics Director Jay Jacobs. “In becoming Auburn’s third Heisman Trophy winner, Cam has joined a truly special fraternity of football legends. We could not be more proud of Cam and the way that he has represented Auburn University.”

Newton completed one of the most dominating seasons in college football history.

The quarterback recorded a nation-best 49 touchdowns, which is more than 69 Football Bowl Subdivision schools have totaled this season.

Newton has led Auburn to a 13-0 record, its seventh Southeastern Conference title, a No. 1 national ranking and a spot in the BCS National Championship Game.

Newton’s eligibility to play for Auburn and his amateur status came into question when his father, Cecil Newton, worked with a scouting service during his son’s recruitment by Mississippi State, according to Auburn University and the NCAA. The father, along with the scout service, actively sought payment for his son’s commitment to attend college and play football.

Auburn has since limited the access Newton’s father has to the athletic department, and Mississippi State has cut ties with the individual involved.

The NCAA ruled the junior quarterback eligible to play for Auburn without any conditions, clearing his path for the Heisman.

“There is no question that Cameron is highly deserving of the most prestigious honor in college football, and I am so proud of him,” said Gene Chizik, head coach. “Not only has Cam been the best player in college football this year, he has also been an incredible leader for our football team.

“Winning the Heisman Trophy is also a tremendous honor for our entire football team, our coaches and our support staff. This is a special day for Cam and for Auburn University, and I feel blessed to be a small part of it.”