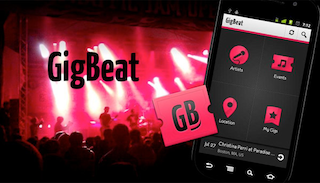 Gigbeat, The Concert Promoter In Your Pocket 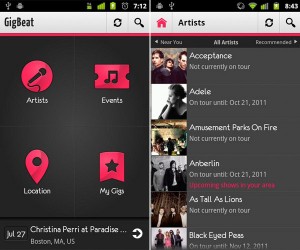 You hear a song walking down the street, and pull out your phone to Shazam the song in order to get the name of the artist. Next, you look up other songs by that artist, and begin to download those to your phone. Finally you’re hooked and want to see them live. Thats where Gigbeat steps in. Gigbeat is an android app that scans your device’s music library for artists and shows when and where they will be on tour. Gigbeat is the brian child of coding engineer, Michael Novak.

The development of Gigbeat began in February 2011, with planning for the app starting in November of 2010. Novak was inspired to create this app after using a plug-in on his desktop which notified him of concerts for artists in his music library.

“I wanted to have information of all the concerts that are in my area,” said Novak. “I would find this so much more useful on my phone then on my desktop.”

Based on initial user reviews, they too find this information useful on their phones.

“I don’t go to concerts much because I don’t really know when there happening,” said Lilly Anderson a student at Temple University in Philadelphia. “Thanks to this app, I may check out a concert featuring my favorite artist.” That is the beauty of the app, Gigbeat does the work for you.

Users are getting the opportunity to go to concerts that they would have other-wised not known about,” says Novak. “When you think about the flow of your day on a normal basis, the things you are doing, searching for concerts doesn’t usually come up on that list, possibly ever.”

Gigbeat not only benefits users, it also potentially helps to generate concert sales.

“Anything that links with your personal music library … and can tell you when those artists are coming to town has a big affect on awareness and ticket sales of events,” said Mike Zeimer, a concert promoter and president of Third String Productions and Z Interactive. “This kind of technology has influenced me many times to remember there are shows going on. It’s really exciting the way this is all going!”

Currently if the user doesn’t have music loaded onto his or her device, Gigbeat allows you to log into your Soundclick or last.fm accounts in order to sync your artists from these services. However, Novak hinted toward future ways that users may allow Gigbeat to scan their favorite artists. Further implementation of social media will be rolled out during the next update.

With the popularity of location based apps such as Foursquare, users will soon be able to “check in” while at a concert, allowing their friends to be notified socially of their current location. Novak also said that deeper integration with Facebook is in the works for Gigbeat and as technology continues to evolve Gigbeat will also continue to evolve.

Gigbeat is currently only available for Android devices running 2.1 or higher and is also compatible with Tablets that are running Honeycomb, however Novak did mention that it’s a possibility that Gigbeat could be making its way to other operating systems such as Apple’s iOS or Windows Mobile.