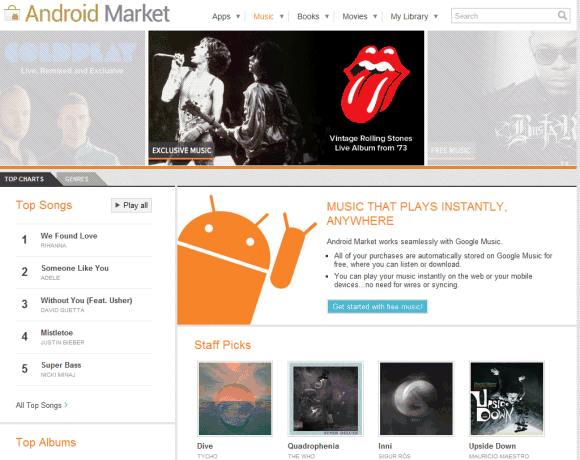 Google unveiled their much anticipated digital music store “Google Music,” this past Wednesday at an event in Los Angeles. For the first time ever Google Inc. will be selling music on its Android Market.

Some songs are free while others are available for 69 cents, 99 cents and $1.29. Artists who are currently available on Google Music include Adele, Jay-Z, Coldplay, Drake, Pearl Jam, The Rolling Stones and Busta Rhymes.

T-Mobile USA is also a partner in the Google music launch. They are offering free songs to their customers and will soon allow them to pay for music purchases through their phone bill.

Google music is allowing the sharing of purchased songs over its social network, Google+. Friends will be able to listen to one another’s songs once for free. People with devices running Android 2.2 and higher can download the Google music app, stream stored songs or download them for offline playback.

Google’s music cloud storage service is free for up to 20,000 songs compared to Apple’s “iTunes Match” which costs $25 a year. Although launching 8 years after Apple’s music store they believe they will be a great competitor and change the way music is shared.