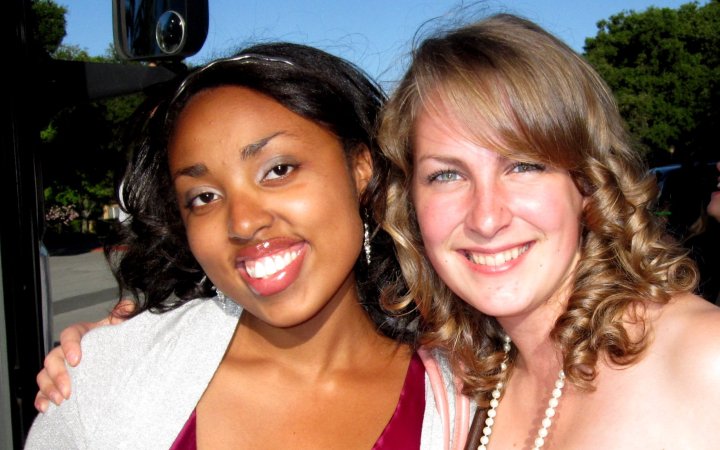 Before starting college, the thought of a mystery roommate left me petrified. I wondered if she would be approachable and we would become the best of friends, or if she would be rude and I would grow to dislike her by the end. After our awkward hellos during my first night at Stanford University, we spent the next year getting to know each other.

We came from very different backgrounds. I grew up in California, and my roommate, Sarah-Marie Chan, pronounced “Khan,” is a bubbly blonde from Alaska.We had different academic interests. She’s into the hard sciences, whereas I’m a ride-or-die humanities girl. We even found different groups of friends. Yet, we were still able to bond over a shared love of pink, Disney musicals and late-night study sessions.

Although we chose to room with other people the following year, to this day, Sarah-Marie and I remain good friends. Across the nation, thousands of college students are living away from home for the first time with people they have never met. Many upperclassmen are also living with strangers in off-campus housing.

Universities love to promote the idea that many of these roommate pairings turn into life-long relationships, but that doesn’t always hold true. A  roommate is defined as “one of two or more persons sharing the same room or living quarters.” This is a correct definition, but it fails to capture the significance of a college roommate. This is not just the person with whom you cohabitate. More often than not, you share your life with this person for the year.

The thriller The Roommate tells the story of a young naive co-ed fromMichigan who goes to college for the first time where she is assigned a roommate. The roommate seems like a nice, normal young woman, but she slowly becomes obsessed with the Michigan student ultimately hurting anyone who comes near her. Though the story of an unsuspecting student living with a crazed psycho was exaggerated for entertainment, there is some truth within the film. And some campuses have experienced other real-life situations that they probably wish were fictional.

This fall, Dominique Frazier, 18, a student at Bowie State University in Maryland, died after being stabbed in her dorm room. One of her roommates, Alexis Simpson, turned herself into the police and was later charged with first-degree murder, second-degree murder and first-degree assault. In an incident at Rutgers University, Tyler Clementi committed suicide after having reported conflicts with his roommate. His freshman roommate, Dharun Ravi, allegedly streamed a live video of Clementi having sexual relations with another man. After he discovered the video, Clementi jumped from the George Washington Bridge. A grand jury indicted Ravi for invasion of privacy among other charges.

To make matters worse, a student at the University of Wisconsin was recently sentenced to 90 days in jail for poisoning her roommate with eye drops. Brianna Charapata, 20, had been suffering from symptoms like fatigue, lost of appetite, nausea from an unknown cause until it was revealed that her roommate Luciana Riechel, 22, had been adding Visine solution to her water over several weeks.  Riechel reportedly told police she wanted to pull a prank on her roommate and had gotten the idea from the hit movie Wedding Crashers.

With stories like these amplified in the media, prospective college students have yet another reason to be anxious about moving away from home to start school—just as I was petrified at the thought of meeting my unknown roommate. Typically, colleges and universities pair incoming freshmen in a room ranging in size from 10 feet by 12 feet to 15 feet by 20 feet with two beds, two desks and two closets. This arrangement can vary greatly depending on the college and location.

Some schools allow incoming students to choose their own roommates beforehand by completing request forms. Many schools have some sort of matching process so the school does the work of the students. Stanford has an extensive process to match roommates, requiring incoming freshmen to complete a questionnaire about their sleeping habits, social level and other factors that help the housing office make pairings. According to the official housing website of the university, roommates are matched based on similar interests despite differences in background or culture.

By living with Sarah-Marie, I also learned what it means to respect someone else even when you don’t understand—or agree—with her. Those skills are ones that will serve a person in life. “It gives you an opportunity to learn how to work with people, compromise … share,” Smith says, summing up the benefits of having roommates. And I must agree; I wouldn’t trade my roommate experience for anything. But after watching The Roommate, I wouldn’t trade having a single all to myself either—just in case.