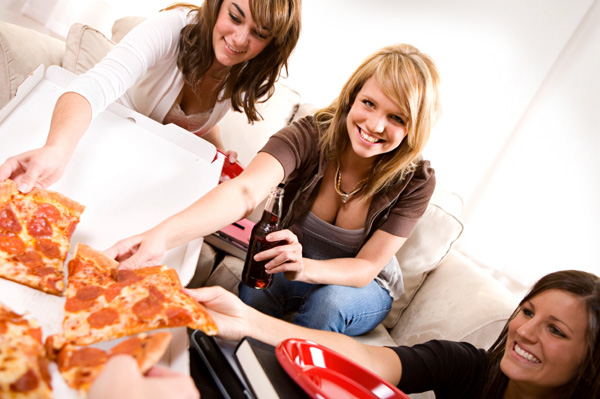 “I Love College,” Asher Roth’s anthem to the collegiate crowd, explores the liberation of the college scene. There’s the freedom to meet who you want, go where you want, and of course, eat what you want.

Filled with a wide range of appetizers, main courses and dessert, the cafeteria can become your best friend. Soon enough the athletic body you had in high school has transformed in to a muffin top. Since the Chicago Tribune‘s introduction of the Freshman 15 in 1985, first year students on campuses everywhere are warned ominously about the mysterious weight gain.

This may be in vain as recent studies have shown otherwise. Researchers Jay Zagorsky and Patricia Smith debunked the myth that has lasted over 20 years. The study which will be released in the December issue of Social Science Quarterly confirmed that the average student only gains 2 to 3 pounds. In total, a mere ten percent of students actually gain the Freshman 15.

“Sleep patterns can be thrown off when there is a change in our living, studying circumstances,” said Rogers. “We know from studies that with an irregular sleep schedule there can be an increase in carbohydrate consumption as a quick energy source.”

As many college students know, getting to bed before 1 a.m can prove difficult. During finals week, Domino’s is usually on speed dial because of its convenience. However, Roger attributes these late take-out moves as contributing factors to weight gain.

“College hours are notoriously long, often with later night eating of higher calorie foods, such as pizza at the end of a study session, or after a night drinking,” said Rogers.

“When you go to college the number one past time is drinking at parties every weekend regardless of how old you are,” said Brandenburg. “Easy access to unlimited bad food plus lots of alcohol equals at least some weight gain, or lots of weight gain for some.”

Just one shot of dark liquor can be up to 188 calories.

Although studies have shown the weight gain is rarely more than 3 pounds, when students are seeing the numbers on the scale rapidly increase it is hard not to believe the now debunked theory. Some students insist they are living proof the Freshman 15 is factual.

“For the most part, we frequently ate home cooked meals and coming to college where there is nothing but fast food definitely takes a toll on your weight,” said Taylor Erskine, a Sophomore at Delaware State University.

Gained weight? Josef Brandenburg reveals how to slim down before your body isn’t able to snap back.

“Skipping dessert, and trading your soda or juice for water when you are college aged is usually all you need to do in terms of nutrition,” said Bradenburg. “And for exercise, go sprinting.  Regular cardio takes forever, is boring, and doesn’t really work for fat loss.  A great place to start is with sprints on a bike or the track.”