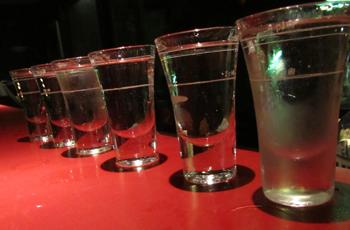 Picture this. You’re out with your friends having a few drinks accompanied by some laughs.  Then you have another drink, and another, and the next thing you know it’s time to go home but you can barely walk straight. The monster hangover isn’t the only thing you’ll need to worry about in the morning.

“I probably drink twice a week and I don’t think it affects my weight,” said Kiara Raiford, a sophomore at Virginia State University.

Like Raiford, most people know the commonly discussed effects of alcohol such as impaired judgment, loss of motor skills, and hangovers. Besides a rotting liver, casual drinkers are led to believe that alcohol won’t affect much more than that.

“You don’t get any nutrients [when you drink alcohol] so you might end up over eating,” said Dr. Rebecca Scritchfield, a certified health fitness specialist at Elite Nutrition in Washington, D.C. “Alcohol produces fatty liver, which is fat tissue around your liver.”

There are empty calories in alcohol, just like in any other food that is considered unhealthy. Young people, especially college students, may not realize exactly how many calories they are putting in their bodies. For every gram of alcohol there are seven calories, and that only accounts for pure alcohol, not mixed drinks. On the other hand, there are only four calories in a gram of protein or carbohydrates.

“I realized that there are calories in alcohol but I guess you don’t really pay attention to them when you’re drinking,” said Sierra Gage, a sophomore at Ohio State University. “I guess I should be more aware of what I’m drinking and how much.”

Gage isn’t the only one that doesn’t think about how many calories she is drinking.  Alcohol inhibits good judgment, causing consumers to continue drinking. Drinking also stimulates hunger, a dangerous combination to the waist line.

“People who are drinking tend not to eat nutritious foods . . . you’re eating pizza and other junk food,” said Scritchfield.

A common trend, especially among undergraduate college students, is binge drinking, or consuming excessive amounts of alcohol at one time. According to the Center for Disease Control and Prevention, young adults ages 18 to 24 account for 25.6 percent of binge drinkers. Not only does binging significantly add to daily caloric intake, but it can also lead to early onset cardiovascular disease and other heart complications.

Be careful when deciding to take back a few drinks,a good rule of thumb is to drink three glasses of water for every serving of alcohol. Consider moderation in drinking just as you should with food.