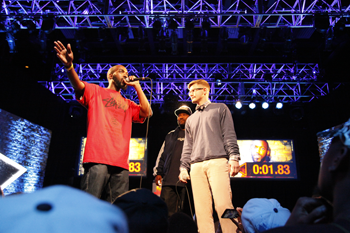 Heavy bass pounded from all sides of the crowded room.  Flashing lights throbbed in sync with the music, playing on the increasing energy and anticipation.

“If you love hip-hop throw your hands in the air!” shouted DJ Alize.  Palms waved as he switched from Dom Kennedy to Bone Thugs n’ Harmony, to TuPac Shakur.

The DC Red Bull EmSee Freestyle Battle, hosted by Bun B of rap group UGK, took place at The Fillmore just outside of DC.  The competition, designed to find the best freestyle rapper, takes place in eight cities all over the country.  Eight local rappers competed and were judged by Joe Budden, Devin the Dude, and southern up-comer Big K.R.I.T., who all performed in between rounds.

The battle began by introducing the competitors.  On a large screen over the DJ’s turntables, pictures of the contestants: Pro’Verb, Grande Marshall, Awthentik, Advesary, Flex Matthews, Trigga Tay, Ice the Villain and D’Meitz flashed by.

Flex Matthews rolling on stage in a wheelchair, only to jump out of it could have been the most shocking part of the night.  Devin the Dude grabbing a blunt from someone in the audience while performing was also memorable.

Instead, D’Meitz, a bow-tied white kid in glasses and a collared sweater, took the crown and cake all at once.

“I wasn’t fooled by the bow-tie and glasses,” said Budden after D’Meitz’s first performance.  “I knew he probably knew how to rap.”

Grande Marshall, who made it to the second round, admitted that D’Meitz’s appearance left him with different expectations.

“I looked up everyone before the show, and when I saw D’Meitz I was like, ‘he’s a clown,’ but he proved everybody wrong,” said Marshall.

The competition was a close one.  During the first round, each rapper was given six visual cues, which included pictures of random objects, such as the Pentagon, a frying pan and an ape skull.  Both rappers performing were instructed to use all visual cues in their one-minute battle.

In the second round, the four remaining had one minute to use word cues like foam and allegiance.  The third round, which included D’Meitz and Advesary, came in two parts.  No cues were used, and the second part was performed without a beat.  The battle was so close that the audience demanded another round.

Not all audience members agreed with the judges’ unanimous decision.  Russell Bailey was dissatisfied with the results.

“White boy come out here, tell a couple of jokes, he was good,” said Bailey. “Then they did a capella, and that’s not [Advesary’s] strong suit, but if they put a beat on it, he would have ripped the [freestyle] shit!  It was enjoyable, but the end results were bullshit.”

“He was better than the last person he battled,” said Murray. “He held it down.  He held his own in D.C., but I don’t know about the finals, though.” Muray added that D. Meitz’s persona may come off as gimmicky on a more prominent stage.

The final competition will be held in Atlanta, where D’ Meitz will compete with seven other rappers for the national championship, and an opportunity to record with a famous producer of his choice.