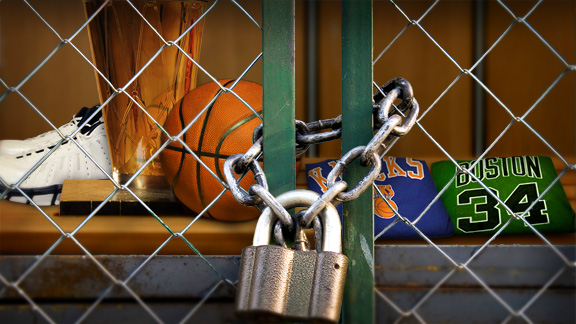 Why the NBA Lockout is Awesome

Contributor
4 min read
The NBA Lockout has been lasted for months and it seems that the chances of the lockout ending anytime soon are slimmer than landing a full-court shot backwards. Players and fans have been innovative in finding ways to fulfill their basketball needs. With the unlikely chance of the basketball season being revived this year, 101 thought we’d share with you a few pros and cons of the NBA Lockout.

The only professional basketball that fans have been watching lately is ESPN Classic, a station “dedicated to the greatest sporting moments and their legends.” The National Hockey Association reports a spike in the amount of people watching recently. Sports that people forgot existed have now peaked basketball fan’s interest in recent months. ESPN reports that WNBA game attendance and television viewership is the highest that it has been since 2005. Twitter users have also said that in desperation to get any type of sports fix they have resorted to viewing unusual sports like:

The NBA lockout may actually be the best thing that ever happened to no-name sports.

Since the start of the lockout fans have been unable to participate in Fantasy Basketball. These fans are now desperately trying to get their basketball fix by blowing the dust off old NBA 2000 games for PlayStation. The video game, NBA 2k12, has sold over 5 million copies and fans are finding that games seem to be an decent alternative to the game until the actual sport comes back to television. These, otherwise sedentary, fans have also resorted to the far healthier option of actually getting off of the couch and playing basketball themselves. Maybe we should keep the owners and players from coming to an agreement in order to assure that our fans keep up this newfound active lifestyle.

Will Work For Food

NBA fans are not the only ones dying to get some kind of basketball action. Players are finding ways to get their basketball fix and bring in some income.  Carmelo Anthony and Amare Stoudemire, of the New York Nicks, have made guest appearances on “Sesame Street.” Ironically, Iman Shumpert, Knicks rookie, has yet to play a game because of the lockout. He has been venting his frustration periodically in a column for the New York Post. LeBron James and a few other NBA stars made a cameo in Nikes “Basketball Never Stops” Commercial. They seemed to be sending a cohesive message that the NBA does not have a monopoly on basketball.

On a more serious note, the NBA Lockout, is seriously affecting the national economy which is already on crutches. Areas around basketball stadiums typically reap the benefits of being in close proximity to all the action. During the season they get increased revenue and have costumers rushing in like flood waters after games. A large amount of this money helps these businesses stay afloat throughout the year, but without this revenue many companies are struggling to keep their heads above water and pay their bills. Do not forget about the announcers, referees, and all other stadium staff who are put out of work because a couple of billionaires felt a pinch in their pocket last season. It’s time someone call a foul on these businessmen, because they are playing a rough game.

The NBA lockout is nonsensical, yet there may be a few reasons to keep it around. Maybe, conventional sports can get their fifteen minutes of fame. There may even be a chance to fix our nations’ horrid obesity rate, giving couch-potaotes a chance to pursue the outlandish idea of participating in sports instead of just watching them.