The Way to the People’s Hearts Is Through Their Wrists

THIS TIME THREE YEARS AGO, Jeffrey Mark was sitting in Charles R. Drew Hall with Aaron Coad and Shannon Jean-Louis, thinking of the next big thing.

T-shirts? No, that’s too typical. Male stuff? No, need a wider audience. Royal Swag? No, that’s an ugly name.

“We didn’t want to come into the market starting just like everyone else,” Mark said. “We wanted to make sure we separated ourselves from other companies.”

The previous summer, they noticed a trend of people starting to wear more bangles, chains, cloth bracelets, beads and other accessories and wanted to add more of that to the market. Mark’s hometown friend, Swain Soo-Hong, had a knack for bead making after learning how to do it from his mother at a young age. The D.C. team decided those skills made him the perfect fit for collaboration on the project.

Drawing from Soo-Hong’s inspiration, the four young entrepreneurs decided to come together and capitalize on the growing trend in semi-formal wrist wear.

The new name for the brand hit Jean-Louis like a lightning bolt.

FAST-FORWARD THREE YEARS, and Aussie & Davis has a faithful clientele spanning from students in the hallways of Howard University to people packing presents under Christmas trees in Germany. As they sit together in a back room in Howard’s Undergraduate Library and reminisce about the humble beginnings of their business, the partners can only laugh in celebration of their success.

“I think before Homecoming, our first taste of success came during the Black Market Friday that spring semester,” Jean-Louis said. Black Market Fridays are held in the university’s student center, providing a forum for budding area entrepreneurs to display and sell their products.

“The response we got from that was an out-of-body experience, seeing everyone gravitate towards the Aussie & Davis table. It was funny to look at everyone else at their table, looking at us like, what’s that, what’s that?”

Mark piped in excitedly, nodding in agreement. “I ain’t even gonna front; we made some money that day,” he said, noting that they nearly sold out of their stock for the day. “That day was crazy.”

Since then, the team has restocked and took off.

So far, the company has 15 to 20 different bracelets ranging from $40 to $60. “It’s not that expensive compared to our competitors that are out charging $150 to 200 for bracelets,” Coad insisted. “We think it’s reasonable.”

“I didn’t get any yet, but I want to,” said Winter Coleman, a photography student at Howard. “It’s a versatile jewelry line. You can dress it up and down. I love that.”

Sieda Johnson, an English student at Howard, often witnesses the effect the Aussie & Davis brand has on others. “My mother loves them,” she said. “It definitely gets the envy of my friends. The sweatshirts and bracelets, they want it.”

“They managed to make a name for themselves in a really significant amount of time,” she said. “They established themselves as brand on campus, with the D.C. community and beyond. “

Aside from having their pieces featured in the 2011 Howard Homecoming Fashion Show, Aussie & Davis has been featured on several blogs like HBCU Buzz, Barrel House BKLYN, Burgundy Ohio and Dope Files.

“We want to introduce everyone to the other side of Aussie & Davis, because it is a brand, not just an accessory line,” Mark said. “We want to brand ourselves into doing the high fashion men’s clothing. The cardigans, the sweaters and the nice tailored jackets.”

The team hopes to not only collaborate with local brands such as La Vita Clothing, a thriving company popular at Howard, as well as eventually be sold in major department stores like Nordstom and Bloomingdale’s.

SOUNDS FINE AND DANDY, but why start with something as small as bracelets. Why not male clothes?

“Men’s clothing would be the easiest, because of course we’re three males,” said Coad. “But at the same time, females like to shop all day everyday, so why not get the female audience first?” 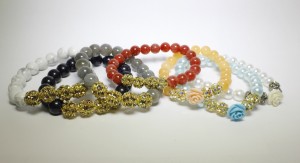