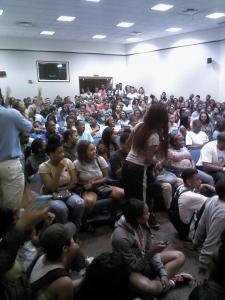 Biden and Ryan Face Off in Feisty VP Debate

The two wasted no time getting to the issues in their uncharacteristically combative 90-minute televised debate Thursday. Biden and Ryan verbally sparred on everything from the state of the economy to military spending.

The two consistently interrupted each other and Biden, seemingly making up for President Obama’s lackluster first-debate performance last week, rebutted with tenacity, smiled incredulously and even chuckled at some of Ryan’s responses.

“We should not be imposing these devastating defense cuts,” Ryan said of the U.S. policy in the Middle East. “When we show that we’re cutting down on defense, it makes us more weak. It projects weakness. And when we look weak, our adversaries are much more willing to test us.”

To which Biden rebutted “With all due respect, that’s a bunch of malarkey … not a single thing he said is accurate.”

According to a CNN poll, the debate winner was Ryan 48 percent, Biden 44 percent with the margin between the two candidates within the polls’ five-point sampling error.

The results didn’t accurately express the thoughts of a few students at Hampton University in Virginia. Turnout was light compared to the over-capacity crowd who watched last week’s presidential debate in the 200-person theater at the student center.

“I definitely think that Biden took this one,” said Isidra Myricks, a junior public relations major from New Jersey. “Ryan was supposed to bring the facts Romney was missing in the presidential debates. He just didn’t deliver a believable message to me.”

“Biden took this one for me,” said Erin Govan, a senior political science major. “He was really feisty, and the things he said made sense. I don’t think that Ryan or Romney has the middle class’ best interest in mind like they say they do.”

Naja McGowan is a student in the Scripps Howard School of Journalism and Communications at Hampton University.