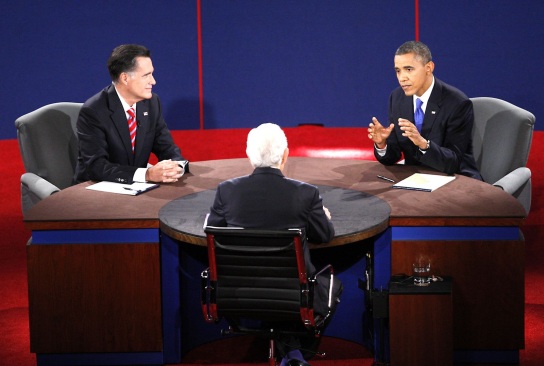 Recent polls show the candidates neck and neck in many states, with President Obama seeming to have an edge in key swing states like Ohio.

After former Massachusetts Gov. Mitt Romney’s undoubtedly strong performance during the first presidential debate, it seems that President Obama has closed the debate series with a knockout.

Obama and Romney faced off in the final presidential debate of the election season on Tuesday night with much at stake. Recent polls have shown that both candidates are neck and neck in many states, but it’s President Obama who seems to have an edge in the key swing states like Ohio.

Being the final debate before Election Day, both candidates put up their fists ready to battle over foreign policy, an area in which Mitt Romney has shown weakness.

Sitting down at a roundtable across from moderator and CBS News anchor Bill Schieffer, Obama and Romney had to answer tough questions about numerous matters dealing with America’s role in worldly affairs.

“My first job as commander-in-chief is to keep America safe,” the president said after being asked about the embassy attack in Libya. “I think it’s important to step back and think about what happened.”

President Obama then went on to criticize what many describe as Romney’s “flip-flopping” on his foreign policy proposals, also bringing up how Romney declared that Russia is America’s greatest threat.

“Every time you’ve offered an opinion, you’ve been wrong,” he said. “You were not only wrong, but were confusing and sending mixed messages to our soldiers and allies.”

It seemed that instead of initially attacking President Obama, who threw the first punch, Romney seemed to agree with what the administration’s approach, though he has been vocal about his disdain for the Obama administration’s foreign policy.

First Romney agreed with the president on the administration’s success dealing with al-Qaida, its handling of Egypt and even its stance of no military action in Syria. “We don’t want to have military involvement there,” he said.

No matter how many times Romney seemed to agree with the administration’s foreign policies, President Obama never let up in attacking Romney for blatantly contradicting previous statements.

“I’m glad that you agree that we’ve been successful in going after al-Qaida, but your strategy has been all over the map,” Obama countered.

The candidates veered a bit off topic several times to talk more about the economy, a strategy that arguably would have more effect on undecided voters.

While the president emphasized nation building, Romney stood by his vaguely described economic reform. He insisted that Iran becoming a nuclear power is the greatest threat to Americans, and he stood by his plan to put more money into military spending.

“We’ve got to strengthen our military long term,” Romney declared.

“What we can’t do,” President Obama argued, “is spend $2 trillion on our military.”

Then what might just be the most famous line of the debate came during Romney’s claim that the administration has reduced military spending, particularly in terms of the size of the Navy.

“You mention the Navy, for example, and that we have fewer ships than we did in 1916,” the president responded. “Well governor, we also have fewer horses and bayonets. … We have these things called aircraft carriers and planes land on them. We have these ships that go underwater, nuclear submarines. It’s not a game of battleship where we’re counting ships.”

By the end of the debate, which was held at Lynn University in Boca Raton, Fla., instant polls by both CNN and CBS showed a clear winner in this final debate: President Obama.

Many argued that when the topic of the economy came into play Mitt Romney was stronger, but it was clear that President Obama’s experience as commander-in-chief undoubtedly worked in his favor during the debate.

Megan Sims writes about political and social issues for 101Magazine.net.