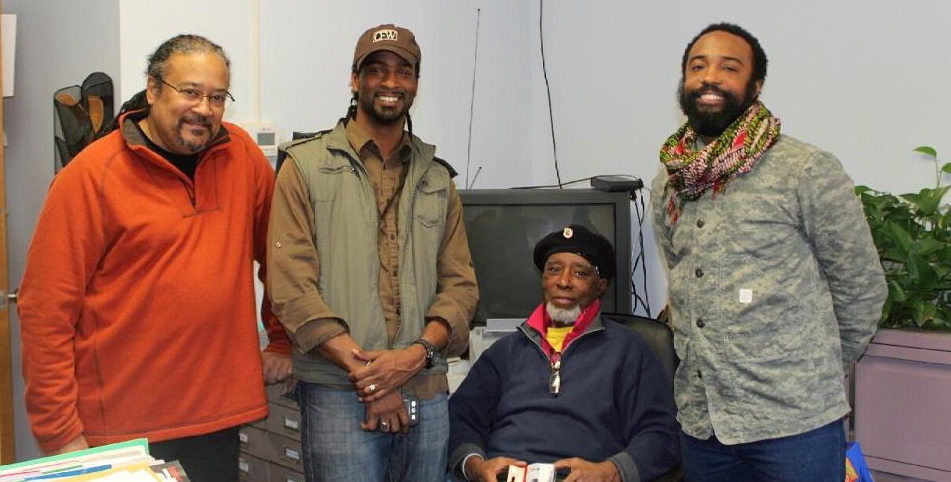 Ernest Dickerson Goes Behind the Scenes With Film Students

Ernest Dickerson, left, with MFA students and one of his professors, Alonzo Crawford, seated.

Ernest Dickerson, award-winning director and cinematographer, returned to his alma mater and took Howard University students behind the scenes of films such as “Juice” and “Malcolm X.”

Dickerson has found success in television, directing shows such as AMC’s “The Walking Dead,” “CSI: Miami,” “The Vampire Diaries” and “The Wire.” He’s also made a name for himself directing movies like “Never Die Alone,” “Blind Faith” and “Bullet Proof.”

In 1992, he made his directorial debut with the movie “Juice,” starring Omar Epps, Khalil Kain, Jermaine Hopkins and the late Tupac Shakur.

He remembers the day he cast the infamous quartet.

“We had to gather unknown actors to keep the rawness of the film,” Dickerson said. “Treach of Naughty By Nature came to read, and there was this kid hanging around him. After he left, I asked the kid if he wanted to read for the part. I gave him the script for Q. He walked into the corner for 10 minutes, memorized the lines and read them for me. He blew me away.”

“Then I asked him to read for Bishop. After he finished, I asked his name and he said ‘Tupac.’ He was still a backup dancer then.”

Dickerson also told film students about his experiences at Howard and what it was like to work as a cinematographer for filmmaker Spike Lee on “Do the Right Thing,” “She’s Gotta Have It,” “Mo’ Better Blues” and “Malcolm X.”

An architecture major at Howard with a minor in photography, he became fascinated with light. “It was a blessing that it became my passion,” said Dickerson, who also studied under Haile Gerima and Alonzo Crawford in the Department of Radio, Television and Film. “When I started working with Spike, we’d joke back and forth all the time about who had better training — Spike attending Morehouse and me doing undergrad here.”

Dickerson has won numerous awards for his work and was the first African American to be inducted into the American Society of Cinematographers.

“Of all my work, I am most proud of ‘Malcolm X,’” Dickerson said. “When it comes to film, I like to funk it up and add something to keep it from being just a movie on the screen. It was so powerful. The reason we make movies is to get the message across.”