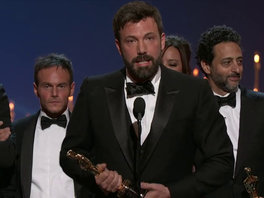 The Oscars: Big Wins, a Slip-Up and Jokes

Ben Affleck was snubbed as a best director nominee, but took home three Oscars for his film “Argo.”

Fans at home, audience members and backstage producers held their breath as host Seth MacFarlane pushed the envelope with his provocative and often controversial sense of humor last night during the 85th annual Academy Awards, which aired live on ABC from the Dolby Theatre.

Luckily for MacFarlane, the show went through without a hitch and he kept a level of class about his jokes, cleverly easing the tension from racier comments.

“A hundred and 50 years later, and it’s still too soon?” he said, recovering from negative feedback after his earlier comment: “I would argue that the actor who really got inside Lincoln’s head was John Wilkes Booth.”

The event, previously criticized for being as long as four and a half hours, lasted a mere three and a half hours this year. It featured star-studded performances, extraordinary tributes and a stellar group of A-list presenters.

Among the presenters was First Lady of the United States, Michelle Obama, who made the announcement for the final and most anticipated award: best picture.

“Argo,” a dramatization based on the true story of a CIA operative’s risky rescue of six U.S diplomats during the 1979 Iran hostage crisis, claimed the Oscar for best motion picture, but not without controversy. “Argo’s” nomination for best picture has caused quite a stir as the film’s director, Ben Affleck, wasn’t also nominated for an award — a first in Academy Award history.

However, Affleck basked in the ambiance of two other Oscars for best adapted screenplay and achievement in film editing.

“Lincoln,” which featured a phenomenal performance by Daniel Day-Lewis as Abraham Lincoln, was nominated for 12 awards, although the film only claimed two. Day-Lewis was named best actor, making him the first to win three Oscars in that category.

“Hunger Games” star, Jennifer Lawrence, won best actress for her performance in “Silver Linings Playbook.” Lawrence fell up the stairs on her way to the stage, but made a quick and witty recovery.

“You guys are just standing up because you feel bad that I fell,” she said as audience members took to their feet.

The fanciful and whimsical “Life of Pi” took the lead for the most awards including original score and achievement in cinematography, visual effects and directing.

“I really want to thank you for believing this story and sharing this incredible journey with me,” said director Ang Lee in his acceptance speech.

“Les Misérables,” which was runner up with three total awards, certainly was the talk of Hollywood this year. The film made history for being the only musical ever to feature live singing and prompted a tribute to other musicals including “Chicago” and “Dream Girls.”

The acknowledgement featured live reenactments from the films’ stars. Catherine Zeta-Jones sang “All That Jazz” from “Chicago,” Jennifer Hudson sang “And I Am Telling You” from “Dreamgirls” and Anne Hathaway joined costar Hugh Jackman and other cast members to sing selections from “Les Misérables.”

Hathaway’s performance as a distraught mother-turned-prostitute in “Les Misérables” earned her an Oscar for best actress in a supporting role.

Another tribute was paid to the James Bond franchise, which celebrated its 50th anniversary last year with the premiere of “Skyfall.” Halle Berry, who co-starred in  “Die Another Day,” presented the tribute. In her introduction, she acknowledged Bond music as “a genre of its own.” The tribute also featured Shirley Bassey, who sang the theme song for three Bond movies, and Adele, who not only gave a live performance of the song “Skyfall,” but she later took home an Oscar for best original song.

MacFarlane certainly kept guests entertained as they awaited announcement of the show’s most highly anticipated awards. Norah Jones was among the celebrity entertainers, performing “Everybody Needs a Best Friend,” written by MacFarlane for his feature film “Ted,” which he produced, directed and stared in as an animated Teddy bear.

The multi-talented MacFarlane also gave a few performances of his own throughout the show, including a satirical song for the “losers.” The facetious number, which took jabs at nominees such as Steven Spielberg and Hugh Jackman, concluded the show on a light and comedic note.