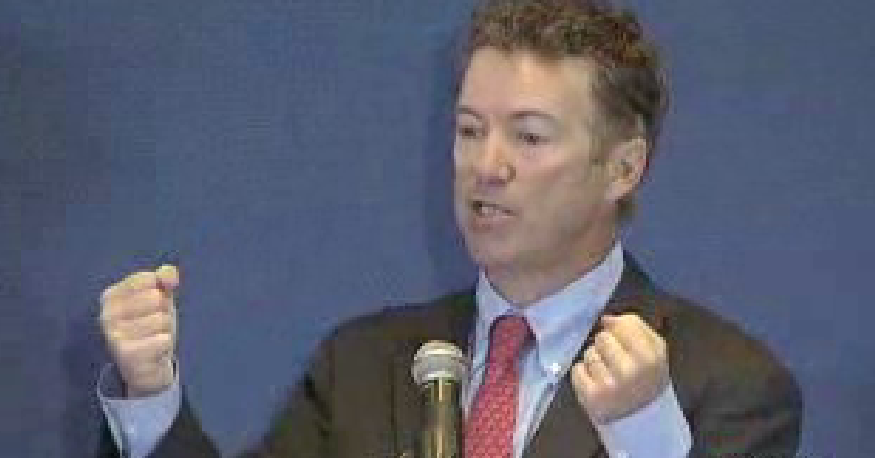 Rand Paul Reaches Out to Black Voters at Howard University 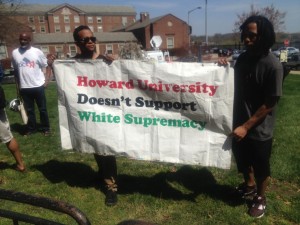 Two protestors were escorted out of the auditorium where U.S. Sen. Rand Paul was speaking after they rushed the stage.

U.S. Sen. Rand Paul, R-Ky., came to Howard University on Wednesday to reach out to black voters and discuss black inclusion in the Republican Party.  Rand was the first Republican to speak at Howard since former Secretary of State Colin Powell back in ‘99.

“The trip will be a success if I could get The Hilltop to have a headline that reads, ‘A Republican Came to Howard, But He Came in Peace,’” Paul said with his hands mimicking a headline.

The audience was mildly amused.

Rand Paul, son of former U.S. presidential candidate Ron Paul, has become a controversial political figure and has stayed in the headlines in recent months after his 13-hour drone filibuster back in March.  Paul is also one of several Republican senators who plan to filibuster any gun control legislation.

“Some have said that I’m either brave or crazy to be here today, but I’ve never been one to sit and watch the world go by without participating,” Paul said.

From there, Paul then quoted famed Howard alumna Toni Morrison saying that, “if there is a book that you really want to read that hasn’t been written yet then you must write it.” He went on to tell the students that he wants a government that leaves them alone so they are encouraged to write their own future.

“You’re more important than any political party … pleadings … or partisan pleadings,” Paul said. “The most important thing you can do has yet to be seen.”

Paul pleaded for Howard students to hear him out despite their preconception of how he has been portrayed through the media.

“Of strongest importance to me is the defense of minority rights — not just racial minorities, but ideological and religious minorities,” Paul said. “If government doesn’t protect the rights of minorities then Democratic majorities could simply legislate our freedoms.”

Paul denied ever rejecting any provision of the civil rights act and said that the more important argument is the balance of state and federal powers.  He then spoke on the “lost history” of the Republican Party and its contributions to advancing civil rights of African Americans.  He credited Republicans for championing emancipation and voting rights for African Americans, which made him wonder why the party of “The Great Emancipator” is losing 95  percent of the black vote. Paul reminded the audience that the Democratic Party encouraged disenfranchisement and was against the civil rights of blacks.

“Democrats … were opposed to blacks voting,” Paul said. “The Republican Party history is rich and chock-full of emancipation and black history.”

Ten minutes into his speech, two Howard students rushed the stage carrying a large sign that read “Howard University Doesn’t Support White Supremacy,” which was met with slight approval from the audience.  The two were quickly removed by law enforcement, but during the struggle one of the protestors called out, “do you see this?”

Paul responded by jokingly stating, “you know, I didn’t know if my speech would be entertaining. Now you’ve had some entertainment.”

During the remainder of Paul’s speech, he expressed his views against current policies pertaining to the economy and big government telling the students “big government is not a friend to African Americans.”  He went on to express his opposition to giving lengthy sentences for nonviolent crimes, as well as mandatory minimum sentencing, which gained approval from the crowd.

At the end of his speech, Paul made one final plea to the black voters:

“I hope some of you will be open to the Republican message,” Paul said. “When the time is right, I hope that African Americans will look to the party of emancipation.”

“I think that Democrats have been buying the black vote for a long time, and I think that people are starting to wake up and change,” said Dylan Stevenson of Alexandria, Va.  Stevenson, who identifies himself as a Libertarian, helped with the Ron Paul campaign during the 2012 presidential election.

“How could it not be a good idea for Rand Paul to come here?” Stevenson asked. “Because if that isn’t happening, how are we going to get the message out that we aren’t the mainstream Republicans that you think we are?”

“I was shocked, offended and embarrassed that Rand Paul was allowed to come speak here to be honest,” Lloyd said. “I support his filibustering on drones. But I think other than that, the principles espoused by the Tea Party wing of the Republican Party are fundamentally incompatible with protecting and supporting the civil rights of people of color.”

Megan Sims is a social issues editor for 101 Magazine.