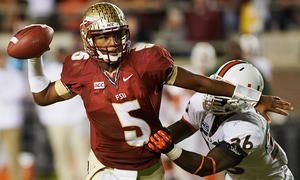 What originated as a “strong prediction” for the past several weeks, turned into reality Saturday night, when ESPN announced freshman Florida State quarterback Jameis Winston as the 2013 Heisman Trophy winner.

“So many people instilled in me trust in the process, from there know the truth. My daddy always told me, ‘Jay Boo, good is never going to be good enough.’ My dad’s friend said, ‘Leave him alone; he is going to win the Heisman anyways,’” said a shaken Winston.

In his first playing season with the Seminoles, Winston threw 3,820 yards and 38 touchdowns with only 10 interceptions to bring them not only an undefeated season, but also to the BCS National Championship against Auburn University on Jan. 6.

By: Brandon Bush The afternoon of Tuesday, April 20, 2021 was a lot for many people, to say the least. It was announced that the jury had reached a verdict in the trial of Derek Chauvin for the murder of George Floyd...

The Legacy of a Tainted Symbol: A Commentary and Review on “The Falcon and the Winter Soldier” Series

Traffic in New York City came to a halt Saturday as hundreds of bikes and ATVs flooded the streets in a Ruff Ryders’s motorcade, part of a monumental funeral procession for the first of two-day tributes to honor DMX...