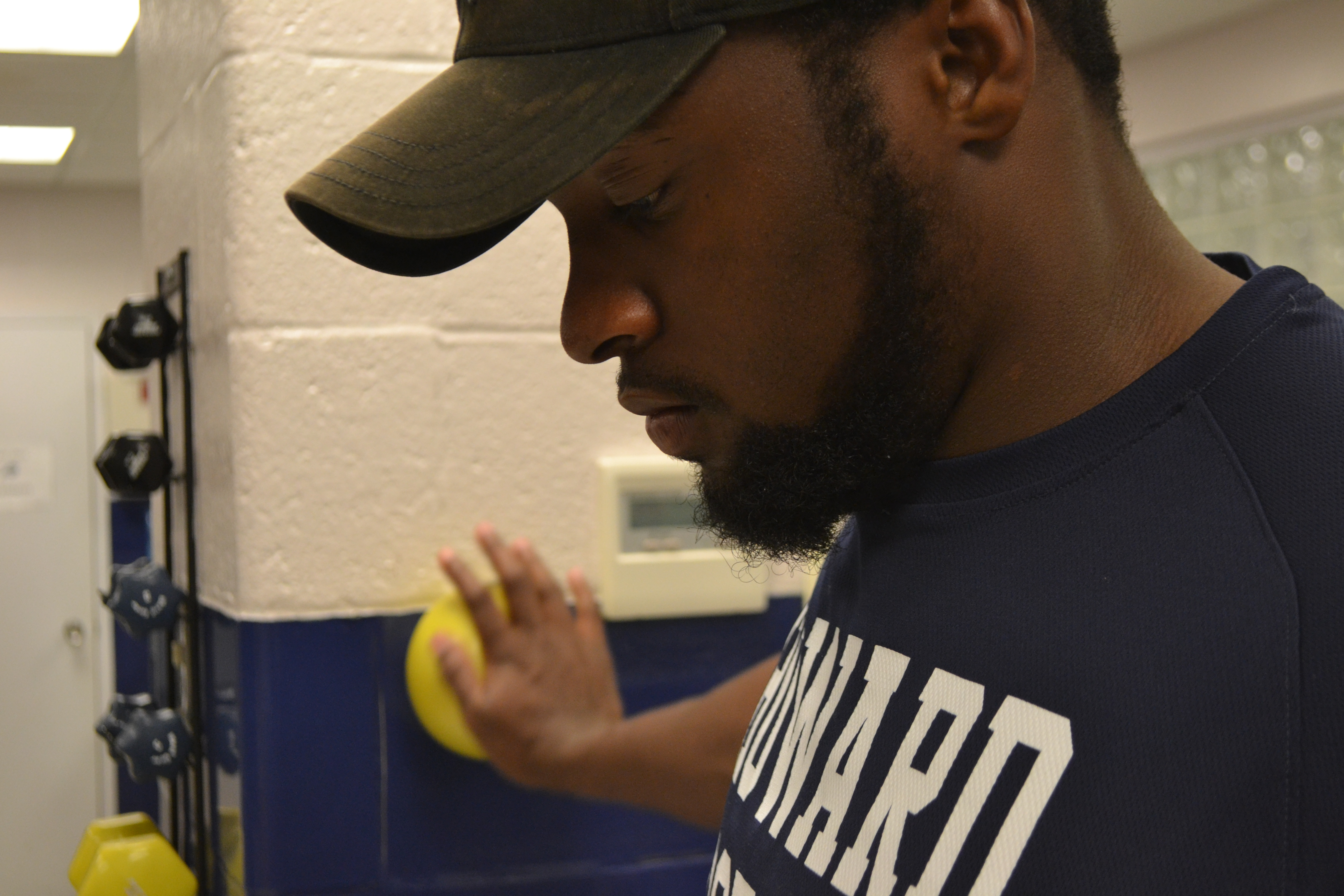 Any athlete will tell you that their natural aptitude is to play the game without an ounce of fear every time they step on the court, field, or up to the plate.

Whether it’s during practice or a game, athletes at all levels play their respective sport cognizant that every decision they make can be held accountable in some type of formality. Sometimes that decision can change the outcome of a game, or earn a player a spot on the bench or in the starting lineup for the next game.

The most devastating fashion to suffer from a split decision in sports, however, is well-known.

To face an injury.

Two months ago, a press conference room was left aghast after the announcement by interim head football coach Rayford Petty that star safety Julien David would be out for the 2013-14 season.

With November approaching, David has had to cope with a different lifestyle while adjusting to life without football.

The 5-foot-11, 205 pound NFL prospect tore his right pectoral muscle before the start of his senior season, leaving him on the sideline as his Bison teammates take the field on Saturdays.

“Initially it was frustrating. Getting hurt and knowing you’re going to be out for the season is nothing any athlete wants to hear.” said David, who suffered this injury the very last day of training camp. “After a while, it didn’t take me long to realize it was out of my control, and the only thing I can control is how fast and how well I can be when I get back.”

Despite being a senior, David is eligible for one more year of football as a student-athlete due to his capability of redshirting this season.

“It actually hit me that I’ll be able to come back stronger. It gives me another year to watch film and perfect my craft,” David said. “It’s actually a blessing in disguise. I have an advantage not a lot of seniors do.”

The Coral Springs, Fl. native uses this positive mentality throughout the rigorous rehab he faces four times a week at the Antoine Bethea Rehabilitation Center.

“A lot of times I’m doing free weight stuff, abduction, and internal rotation,” David stated. “It’s building back the foundation of my shoulder muscle and bicep so I can build stability and get my strength and range of motion back.”

Last season, David played a pivotal role in decimating offenses as he led the entire conference with 108 tackles, piquing the interest of NFL scouts that anticipated a scintillating senior year.

Players that happen to have the next level in hindsight are well-aware that an injury will raise questions to scouts, let alone an injury that ends a season.

For David, he refuses to believe this injury will impinge his future in football as his mentality consists of overcoming this obstacle in his career.

“A lot of times with injuries, either two things or going to happen—you’re going to fall, or you’re going to overcome. I have faith that I’ll overcome,” David said, vehemently.

The Howard safety is conscious that the ability to successfully overcome this hindrance is indeed possible as his story is similar to former South Carolina running back Marcus Lattimore, who faced a season-ending injury in his last year as a Gamecock.

“When you see a guy like Marcus Lattimore still make it and get drafted, obviously he overcame. As long as I can stay healthy after I come back, I know for a fact I’ll be able to overcome,” continued David.

While David recovers, it would be incredulous to believe the high-profiled student-athlete has been marginalized or forgotten by players and coaches throughout this process.

David, who helped lead a stalwart Bison defense to its first winning season in nearly a decade last year, still travels with the team, attends morning meetings, and is on the sideline during games to do more than just root his teammates on.

“[David] does a great job just being on the sideline on gameday, and once the coaches are finished talking to players about adjustments on the field, he’s always there encouraging them,” said interim head coach Rayford Petty. “He knows our system well enough that he can also give some pointers as to what he would do in a situation.

“He’s just as important on the sideline as he is on the field.”

One player who receives that extra motivation and coaching from David on the sideline is the man who was meant to play right beside him in the secondary this year, safety Cameron Alston.

“I try to make sure I’m helping [Alston] out because sometimes it’s hard for coaches and players to be on the same page. I understand how you can lose that connection so I try to do as much as possible since I’m not on the field,” David said.

As David motivates Alston to be productive on the field, Alston motivates him in return throughout the rehab of his counterpart. Alston is familiar with the position David has been placed in as he also missed an entire season of football due to an ACL injury last year.

“Take your rehab serious. Never miss a day. Make sure you get [the pectoral muscle] back to its full strength, even better to what it was before you got hurt,” Alston initially and still stresses to David consistently.

Alston’s actions on the field can be a subconscious inspiration to David as he leads the team in tackles this year, showing a full recovery from such a gruesome injury as well as the ability to overcome from it.

David believes his journey to reaching that point is happening one day at a time. Many precocious athletes have overcame similar adversities before, and David’s ability to do so appears to be no different

“I have a lot more to offer for my last season, and I plan to double my efforts and come back stronger and better than before,” said David. “Words only mean so much to me, so all I can really say is for people to wait and see come next season what I’ll have to offer next year.”