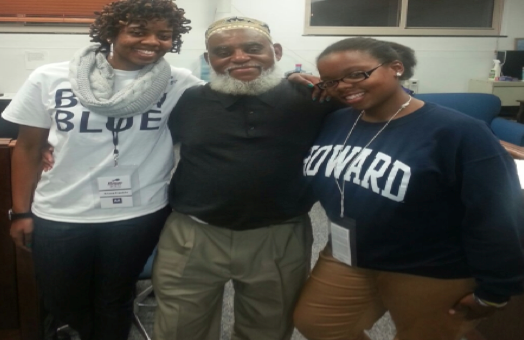 Committing to a university for three decades is an accomplishment that cannot be unheeded. For Howard’s Sports Information Director Edward Hill, this milestone will officially be captured on November 26, 2013—marking the exact date Hill began handling sports information duties 30 years ago.

“These days, you rarely see someone in any profession dedicate themselves for as long as Mr. Hill has to Howard, which makes his milestone so impressive,” said Assistant Sports Information Director Lamar Carter.

Hill, who’s been inducted into the Mid-Eastern Athletic Conference Hall of Fame, has exhibited a commitment that is simply incomparable.

When he first arrived at The Mecca in 1983, Hill served as an assistant to former Sports Information Director Ricky Clemons. Once Clemons received a job offer with the Olympics, the onus was placed on Hill in 1986 and he succeeded all expectations.

“Mr. Hill is hands down the best person I ever hired, and I say that without hesitation,” said Clemons, who also worked with Hill at The Washington Post before Howard. “I would’ve never thought that he would still be at Howard 30 years later, but I’m glad he is.”

His commitment and exceptional work ethic has not only earned him a spot in the MEAC Hall of Fame, but also honors from the College Sports Information Directors of America (CoSIDA), in which he was presented with the 25-Year Service Award.

Hill was also honored by CoSIDA after earning the Bob Kenworthy Award for the community service he consistently puts forth outside the profession.

He’s served in the Washington D.C. community through the Boys and Girls Clubs of America, become head coach and co-founder of the DC Warriors basketball program and counseled for the National Youth Sports Program.

“The impact Ed has made in the community is incredible,” said Clemons. “He cares about young people and helping them develop and nurture more than anything.”

Hill, who’s a husband and father of six children, has yet to spend his 30 years at Howard just gathering content and information, posting recaps of games, and managing the public relations side of Howard athletics.

Instead, he’s elected to be a pivotal force in the community and mentor the copious amount of students that have walked through his door, while still managing his responsibilities at an efficient level.

Under his direction, Hill has helped shape several careers of Howard alumni as well as people that have worked along side of him.

Former SID Assistant Chevonne Mansfield believes Hill’s impact was a vital reason for her continued success, as she is now the assistant director of media relations for the Southeastern Conference.

“I couldn’t have had a better mentor to guide me through my first years in the industry,” said Mansfield. “Under [Hill’s] direction, I was able to learn how to balance the myriad of responsibilities associated with being the primary contact for numerous sports. His mentorship eventually led me to my current position with the SEC.”

“When you think of Howard athletics, you automatically think of Edward Hill, that’s the impact he has on the university,” said Noble-Watson. “As his assistant, he showed me what exactly was needed to be successful in this field.”

Some form of motivation has to resonate in order to keep one going for 30 years and still find enjoyment in his or her respective field. For Hill, influencing the next generation seems to do it.

“I’ve been blessed in having the opportunity to influence some of the youngest and brightest minds in the universe,” said Hill. “To have some of the networking opportunities for young people, it’s gratifying and rewarding. That’s why I keep going. I’m excited to still be at Howard University after 30 years, primarily because of the students.”