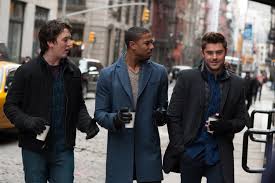 A Film on Awkward Moments in Dating

Three best friends sweet talk their way into women’s hearts and beds with their twist on the romantic comedy. “That Awkward Moment” gives you something to think about as these friends embrace their “bromance” and single life.

David Nusair from Reel Film Reviews thinks “the three stars manage to infuse their familiar characters with a congeniality that proves impossible to resist.”

Each man epitomizes the clichés in the dating world. Zac Efron plays womanizer Jason and encourages his two friends to embark on the journey of living the ultimate single life. Throughout the movie, Jason expresses that the only way to stay above water in the world of dating is to keep a roster. His advice falls short sooner rather than later.

Michael B. Jordan plays Mikey the hopeless romantic. Although his relationship is on the rocky side, he tries to get his friends to realize that there is someone out there for everyone.

And then there is Daniel played by Miles Teller who is a mixture of womanizer and hopeless romantic. His advice is stick with the “bro code,” and there will not be any flaws.

This dynamic trio gives audiences laughter, sadness and the raw truth during the 94- minute movie. At points in the film, the characters realize that maybe their approach isn’t bulletproof, which adds to the quality of the movie.

“Don’t be fooled,” film critic Blake Howard suggests with mixed reviews. “That Awkward Moment (retitled ‘Are We Officially Dating’ for Australian audiences) takes a tired ’90s feeling premise, promptly forgets it and meanders for an excruciating 90 minutes only to deliver its best material in the outtakes,” says Howard, editor and co-founder of the “geek film website” GraffitiWithPunctuation.net.

#ThatAwkwardMomentMovie is a funny movie talking about our generation…giving you few tips about love & how to date. It’s out tomorrow

] With stiff competition from “Ride Along” and the well-liked animated film “Frozen,” “That Awkward Moment” captured the third spot, earning $9.1 million on opening weekend.  Although the No. 3 spot isn’t exactly what some critics anticipated, the trio triumphed in its own way.

Jasmine Quarles writes and edits articles about TV and film for 101Magazine.net.

Are you in a relationship? Take this interactive quiz to find out.