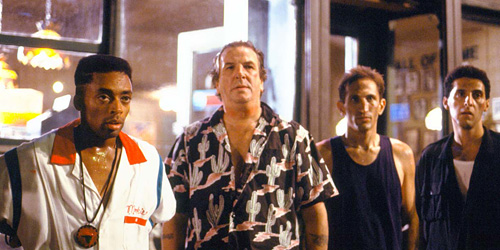 As Black History Month blends into Oscar season, here are five classic movies — and one in the making — that have made viewers laugh, cry and think.

Easily considered one of Spike Lee’s most popular movies, “Do the Right Thing” focuses on the racial tensions that escalate on the hottest day of the year in the Bedford-Stuyvesant section of Brooklyn. It was nominated for two Oscars: Best Actor in a Supporting Role for Danny Aiello and Best Screenplay for Spike Lee, who wrote, produced and directed the film. Bryan Williams, a film major at Howard University, appreciates the “art direction and complex characters.”

In this scene, the characters angrily yell derogatory racial names. Junior George Blount says he loves the scene because it shows “real insight on how people of different races look at each other.” Spike Lee has never been one to sugarcoat things, and this scene definitely showcases this part of his personality.

John Singleton offered a multidimensional look at South-Central Los Angeles, which the media vilified in the ‘80s and ‘90s. A major problem in the area was the killing of too many young black people. The film’s realistic portrayal of South-Central’s issues (violence, drugs, police brutality, etc.) propelled this film onto the “classic” list in 1991 and it still remains there today. The film was created on a $6 million budget, but has grossed nearly $60 million, according to the Internet Movie database.

[SPOILER ALERT] Audiences truly felt the reality of the main characters’ situation after the fatal shooting of Ricky, played by Morris Chestnut. Sophomore Julian Adams says that the realism with Ricky’s character really enforces the point that Singleton was trying to make. “Ricky was going to go to college; he had a son that has to grow up without a father,” Adams recalls. “We realize how dramatically things can change in a flash.”

The movie is all about power and respect, which is referred to as “the juice.” We witness how quickly power can ruin friendships and lives before there is a chance to stop it. The film stars Omar Epps as Q and Tupac Shakur who played the infamous character Bishop. Bishop’s  desperate pursuit of juice leads all the characters through a series of mishaps, culminating in the film’s climax, which is forever ingrained in the minds of many viewers who saw the film.

[SPOILER ALERT] In the climax of the film, Q is running away from Bishop throughout the city, ending in a rooftop fight during which Bishop falls off the roof and hangs onto the side for dear life. Q tries to save his former friend, but Bishop eventually falls and dies. As he leaves the roof, a young person tells him “Hey, you got the juice now.” Q shakes his head, because he never wanted it. “I think that really conveys the theme of the movie, said journalism major Brelaun Douglas. “He got the respect now, but look what he had to do to get it.”

It is a love story that so many people have fallen in love with. The main characters grew up together, and we see how their love for basketball is the medium through which they express their love. The film starred Sanaa Lathan as Monica and Omar Epps as Quincy, both of whom had the dream of becoming professional basketball players. They fall in love along the way, but we also see the heartbreak they experienced in discovering themselves.

[SPOILER ALERT] Toward the end of the movie, Monica challenges Quincy to a game of one-on-one to win back his heart. As they battle on the court, Quincy acts as if he doesn’t want Monica to win. After he wins the game, he challenges her to double or nothing. Afterwards they kiss, signifying that they will be together despite their egos, which ended the relationship in the first place.

Over 25 years after its release date, this film is still hilarious no matter how many times it is viewed. Eddie Murphy plays Prince Akeem, an African Prince who travels to Queens, N.Y., to find the perfect wife. Accompanying him is Semmi, played by Arsenio Hall. Being from a different country and trying to survive in the “concrete jungle” of New York City puts them in hilarious circumstances because of their naiveté.

While this movie is filled with many hilarious scenes, the most influential scene would probably be the dance sequence in which they introduce Prince Akeem’s wife in the planned arranged marriage. The dance scene beautifully showcases African culture through the fashion and choreography.

This film is new, so it may be presumptive to consider it a classic just yet. However, the film has already won Golden Globe, Screen Actors Guild and other awards and is nominated for nine Oscars. This film is about black slave culture, but it does not deliver the sugarcoated version of slavery that so many students learn in school.