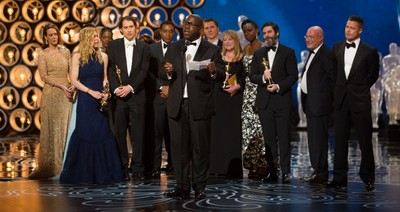 An Oscar Mix of “Gravity,” Slavery … and Pizza

“12 Years a Slave” won the coveted award for Best Picture, making Steve McQueen the first African-American director to be honored in this category. The film also won Best Adapted Screenplay, and Lupita Nyong’o, this year’s breakout star, captured the Oscar for Best Actress in a Supporting role. Nyong’o gave an emotional acceptance speech in which she acknowledged the spirit of Patsy, the character she played in the film, for guiding her performance.

“When I look down at this golden statue, may it remind me and every little child that no matter where you’re from, your dreams are valid,” Nyong’o tearfully said.

Matthew McConaughey won the Best Actor Oscar for his role as an AIDS victim who sells medication to other AIDS victims in “Dallas Buyers Club.” The film also won for Achievement in Makeup and Hairstyling and Best Actor in a Supporting Role, which went to Jared Leto.

The Oscar for Best Actress in a Leading Role went to Cate Blanchett for her performance in “Blue Jasmine,” which was directed and written by Woody Allen.

“Let It Go,” from the Best Animated Feature winner “Frozen,” won Best Original Song. Idina Menzel performed the song, along with other nominees in the category such as “The Moon Song” by Karen O of the Yeah Yeah Yeahs, featuring Ezra Koenig, from “Her.”

Crowd favorite Pharrell Williams sang “Happy” from the animated film “Despicable Me 2” and danced with nominees in the audience including Nyong’o and Meryl Streep. Although “Happy” didn’t win, it is No. 1  on the Billboard Hot 100 chart.

Emmy Award-winning talk show host Ellen DeGeneres also interacted with the audience. In her second year in a row as host, DeGeneres ordered pizza for the audience and took a “selfie” that became the most retweeted photo in Twitter history with more than 2.7 million retweets.

It was a night to remember at the 86th annual Academy Awards, but if you missed the show, below is the full list of winners:

Best Original Song
Happy from Despicable Me 2
Let It Go from Frozen—Winner
The Moon Song from Her
Ordinary Love from Mandela: Long Walk to Freedom

Best Live Action Short Film
Aquel No Era Yo (That Wasn’t Me)
Avant Que De Tout Perdre (Just Before Losing Everything)
Helium
PITÄÄKÖ MUN KAIKKI HOITAA? (Do I Have to Take Care of Everything?)
The Voorman Problem

Achievement in Sound Editing
All is Lost
Captain Phillips
Gravity—WINNER
The Hobbit: The Desolation of Smaug
Lone Survivor

Achievement in Visual Effects
Gravity—WINNER
The Hobbit: The Desolation of Smaug
Iron Man 3
The Lone Ranger
Star Trek Into Darkness