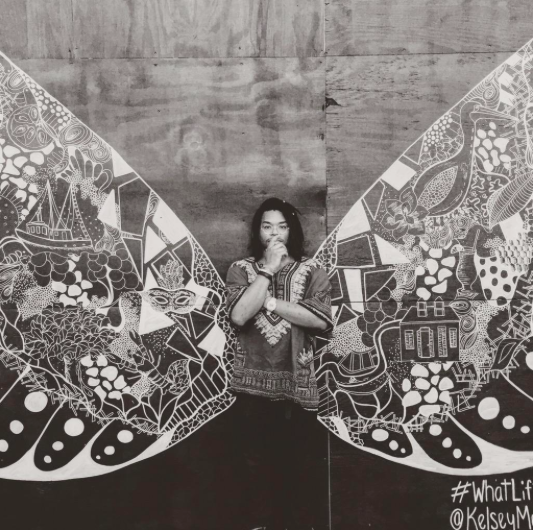 Howard University DJ Finds a Career within the D.C. Community

22-year-old Troy “DJ DeTroyt” Gardner sits in his room in front of two speakers, a laptop and a couple of mixers, bobbing his head to one of the beats he’s creating. Cartoon Network’s Adventure Time is muted on the television next to him.

“Producing really isn’t that difficult,” Gardner says. “It’s about figuring out the software and laying down samples.”

In the corner of Gardner’s room lay a pile of posters for a performance. The performance, at The U Street Music Hall on April 5, was an opportunity for Gardner to practice his DJ-ing on a new crowd and be one of two DJs to open up for Joseph “Grandmaster Flash” Saddler, who’s considered by many to be the godfather of hip-hop.

“Grandmaster Flash is the man who made turntables into music,” Gardner says. “He made what I’m doing possible.”

When Saddler stepped on stage, Gardner slipped away from the crowd to watch him work from the stage.

“I can’t narrow down all the stuff I want to ask Grandmaster Flash- I’d just be like ‘can I have your number or email?’ because I have so many things to ask,” Gardner says later that evening. Unfortunately, Saddler’s busy line up only allowed for him and Gardner to exchange a brief greeting.

The performance with Saddler is just one of the many opportunities Gardner has had to perform for larger crowds at venues such asClub Love and The Howard Theatre.

Gardner, a senior audio production major at Howard University, has been trying his hand in DJ-ing and producing since 2011.

“My dad- he produces and plays bass,” Gardner says. “If I didn’t go to Howard, I would’ve shadowed him. But I didn’t want to do that because our styles would’ve conformed.”

Gardner, a Detroit native, chose to attend Howard University because of its impressive legacy.

Luckily, Howard University turned out to be beneficial place to start a DJ-ing and music production career. Gardner is not its only success story.

“This community is a great place to start a [music] career because there are so many opportunities and organizations and things to DJ at,” says Courtney “DJ Swerve” Beazer, a freshman sports management major and fellow university DJ.

“I think Howard is a good starting place. It helps you diversify your music selection and Howard is also a tough crowd,” Joyner says. “However, it’s also easy to get stuck here and not move forward in the area or wherever you want to go, DJ-wise. Troy is leaving this year and I think that’s the best decision he ever made other than to start DJ-ing.”

Gardner finds this to be true in his experience.

“My biggest recommendation to any Howard DJ is to avoid becoming just a college DJ,” Gardner says. “If you really want to pursue music, you can’t be satisfied with just this.”

“On campus, I don’t think [Gardner] gets the recognition he deserves,” Joyner says. “[The students] don’t understand his versatility and techniques that he has that make him so much more than a DJ, but also a turntablilist… he can DJ literally any genre, from Trap, to EDM, to soul, to hip-hop.”

Gardner’s favorite production and DJ-ing tool is SoundCloud, a website that allows producers, artists, and DJs to share their music with the public for free.

“It connects you to independent artist,” Gardner says. “There’s no pictures, no videos, no reposting memes and all that. You can put music out without being a douche about it.”

Gardner says his favorite genre to listen to and work with is neo-soul, including artists like Jill Scott, Erykah Badu and Asante.

“It’s just so smooth!” Gardner says, explaining his love for neo-soul. “Ain’t nothing smoother than Jill Scott’s A Long Walk, or something. It’s just feel-good music. Slow or fast, it doesn’t really matter. You feel good listening to it.”

Gardner says that same “smoothness” found in neo-soul is found in good DJ-ing. While at The U Street Music Hall, Gardner says that’s what he likes about Jahsonic, a local Washingtonian DJ, that was the second DJ to open up for Grandmaster Flash.

Despite the perks of being able to work with bigger names and nicer venues, Gardner says DJ-ing has its downsides. He says an immense amount of money, time, and effort has to be put into DJ-ing. There is also the issue of getting paid by party-promoters.

“It’s gotten to the point where, like, someone will ask [DJ] LR or me to DJ at an event and we just send them back money signs and a question marks,” Gardner says, laughing. “People think they can just not pay DJs, so we have to set the standard on campus.”

“Don’t DJ because you think DJs get girls, money, popularity, all that,” Gardner explains, “People will expect so much out of you. You’re forced to ignore certain aspect of your life when trying to balance everything. It’s all about learning how to take one thing at a time.”

When asked how he deals with the stress and pressure of his job, Gardner says he’s dealt with stress all of his life. He says being at the DJ booth actually helps remove him from the stressful and less appealing parts of the college party scene.

“I’m not a partier,” Gardner says. “It’s hot, sweaty, and messy. People step on your shoes, pushing, all that. People get into fights…. No one bothers the DJ with all that nonsense.”

Gardner has not kept his knowledge and experience as a DJ to himself. Beazer, whom Gardner sites as a Howard University DJ he has high hopes for, says he has learned an immense amount from Gardner.

“Troy was one of the first DJs that gave me advice and he was there when I DJ’d my first event on campus,” Beazer says. “Working with him has allowed me to learn a lot about not only the technical aspects of DJ-ing, but also about the politics of the [music] industry. He has always opened his house up for me to come over and practice, which has been very helpful- being that he’s at a point in DJ-ing that I want to reach some day.”

Beazer is not the only DJ on Howard’s campus learning something from Gardner- Joyner, the only person Gardner says he can work side-by-side with, says they teach each other constantly.

“I’ve learned so much from Troy, especially with the technical aspect that comes with DJ-ing- particularly when it comes to the groove of the music,” Joyner says. “I think I taught him about song selection- that’s what I am best at. But overall, I think Troy and I learn from each other every day.”

After leaving Howard, Gardner intends to move to Los Angeles or Atlanta for better opportunities and money to DJ and produce. Still, he does not leave Howard without passing on a legacy and a strong impression, especially among his fellow DJs.

Beazer says, “He has taught me to work hard and practice every day. He has also taught me that being out in the world is hard and we must really go hard to be successful with DJ-ing because it might be all we have at the end of the day.”

Along with the influence he has left, Gardner has a few suggestions of his own for future Howard University DJs.

“Play some new stuff, play some different stuff,” Gardner says. “I’ll make a lot of mistakes, but it’s about confidence. You’ve got to be confident and bold. When everyone starts cheering and dancing after you drop a song, it makes it all worth it.”