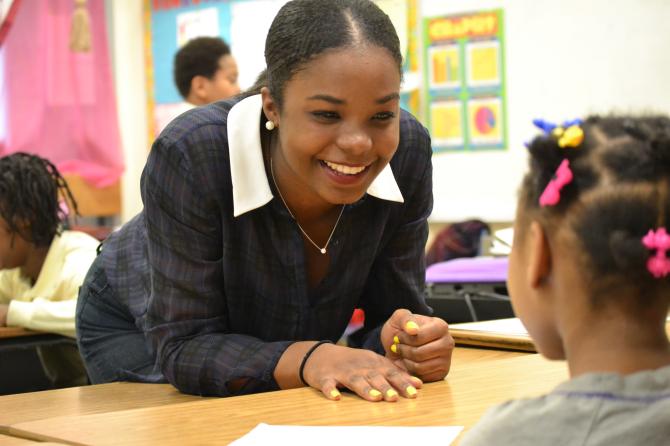 A jeep driven by Chelsea Gaddis loops around Euclid Street and back onto 16th Street in Northwest Washington, D.C., around 10 p.m. She laughs and chats with three young men piled in the back of her jeep, as she drives. Gaddis, a graduating senior at Howard University, is also the sight coordinator for the university’s 2014 Alternative Spring Break (ASB) trip to Detroit. The young men in her jeep, Randall Parham, Aman Johnson and Theodore Lee, are just three of 43 student participants on the trip.

“Detroit was something else, man,” Johnson, sophomore business marketing major, says, as everyone in the car nods. “I can’t believe we were in freezing cold Michigan just last week.”

According Howard University’s ASB 2014 website, Detroit is just one of seven locations students were sent to this year to complete service projects focusing on issues that plague communities within each location.

Participants traveling to Detroit during their spring break focused on improving the literacy rates of elementary and high school students. Other locations focused on gun and gang violence, poverty and health education.

The ASB program has been run through Howard University’s Rankin Chapel for 20 years. On this 20-year anniversary, nearly 400 volunteers descended upon various cities, giving a combined 16,000 hours of service.

“Each program has something to offer [Howard University students],” Dr. Bernard L. Richardson, dean of Rankin Chapel, says to a church full of students a few weeks before they departed. “You will find your mission and purpose no matter where you are placed.”

The students placed in Detroit were inspired to participate by a various reasons that led them to forego a trip home or tanning on a beach somewhere.

“Honestly, I needed something to do,” Parham, a sophomore business management major, explains. “It would get me out the area, and it didn’t cost much.”

Freshman Spanish major Monica Johnson, on the other hand, had intentions to participate in ASB before she attended Howard.

“I thought that it was an excellent way to spend your break, you know, helping others,” Johnson says. “I have always loved volunteering so I wanted to continue it in college.”

Gaddis, a Detroit native, participated in ASB since she was a freshman. She went to Chicago in her freshmen and sophomore years and in her junior year, she stayed in Washington, D.C., to act as database manager for the entire service project. When Gaddis applied to become a site coordinator in her senior year, she focused on the Detroit location because of its service mission.

“I was drawn to the over-arching theme of preventing illiteracy in Detroit,” Gaddis says. “Both my mother and my grandmother are educators. Although I don’t see myself as a teacher, I definitely would like to see myself somewhere in the education system.”

Preparation for a service project of this size proved itself to be an enormous task. Not only were site coordinators expected to set up an itinerary each day, but they also had to find sponsors, housing and some form of entertainments for their participants.

“Pulaski Elementary School pulled out of the program at literally the last second- like, an hour before the second group was supposed to go over,” Gaddis says. “That’s what I’m saying about the unknown. You just can’t predict what will happen. But we bounced back, which was great. I ended up having them spend their afternoons at Christ Child House, an orphanage for boys.”

Participants, while preparing for departure, were also nervous about some of the issues they might face on the trip.

“I was worried about getting a mentee at the high school that’s taller than me.” Jerel Sangster, a sophomore broadcast major, says, laughing. “I’m 5’8. If the person I got was 6’1, how can I expect him to respect me?”

Many volunteers were worried about their interactions with the high school students.

“I was definitely nervous my high school student mentee would be against this [ASB] program,” Parham says. “They wouldn’t respond well to my advice.”

Despite any nervous or uneasy feelings about the service trip, students arrived at 7 a.m. on March 8 at Howard University’s Crampton Auditorium for departure. Dr. Gregory Carr, the university’s African American studies professor and department chair, spoke to the students about what they should expect in the “Motor City.”

“Let’s look at some statistics. 80 percent of Detroit is black. 80 percent of the state of Michigan is white,” Carr explains to a group of sleepy volunteers in the basement of the auditorium. “After the bankruptcy, white folks essentially took over the Detroit government. How can we ensure members of the community’s voices will be heard if Detroit’s very own can’t make decisions for itself?”

Carr asked the volunteers what they considered to be problems that exacerbate illiteracy in Detroit. Participants cited students struggling with reading comprehension, an impatient school system and getting little to no reiteration of what they are learning in classrooms at home.

After the discussion, students boarded the bus, preparing themselves for a 9-12 hour drive to Detroit Mercy University, which offered dorms as housing for volunteers.

“Those bus ride naps were actually the best sleep I got that week,” Lee, a sophomore business marketing major, says. “We got literally no sleep during the week because of all the stuff we had to do.”

During their week of service, participants ate breakfast at 7 a.m. and boarded a bus no later than 8 a.m.. The participants split into three groups. Two groups visited Coleman A. Young Elementary School, near the heart of Detroit, in the morning. Then the two groups split up in the afternoon. One group went to Osborn College Preparatory Academy, and the other went to an adult education center to work with people over 18 years old. The third group of volunteers went to Cody High School in the morning and Christ Child House Orphanage in the afternoon.

After their trips to the high schools, elementary school and orphanages, volunteers visited shelters around Detroit, including Detroit Rescue Mission and Oasis Soup Kitchen.

Various groups fed the participants, including the Howard University Alumni Association Detroit Chapter, Hope Missionary Baptist Church and the Alpha Phi Alpha Inc. Alumni Detroit Chapter. These groups, along with others, provided participants with various perks, including a tour of the Chrysler Building and tickets to a Detroit Pistons game. With the exception of one unplanned snow day that shut down public schools, most activities and school visits went as planned.

“Chelsea [Gaddis] really set us up with a great week,” Sangster says. “It went really well, and we accomplished a lot of stuff in a little bit of time.”

Despite a week full of activities outside of the classroom, what seemed to impact many students the most was their interaction with the students.

“I was most effected by the little kids at the elementary school,” Parham says. “I left Detroit motivated to fulfill what they thought of us as students- what they looked up to us as.”

Other students were impacted by the physical and emotional state of Detroit.

“It’s a lot worse off than even the roughest parts of southeast, D.C.,” Parham says. “And the elementary schools students were really smart, but didn’t have the tools necessary to be where they should be, education-wise. I spoke with my first grade class’ teacher and she told me she had two homeless kids. I couldn’t believe that because you really couldn’t tell by looking at the class.”

Monica Johnson says, “As we got closer to the places where we volunteered, there were so many vacant lots, blocks filled with abandoned houses surrounded by overgrown grass and graffiti on all the buildings. Many of my mentees lived in bad neighborhoods and had to take multiple city buses just to get to school.”

Gaddis agrees that some students in the Detroit school system are falling through the cracks.

“There’s a lack of motivation from both the students and the teachers,” Gaddis says. “There’s not culture of enthusiasm built around learning.”

In spite of the painful discoveries made on the trip, volunteers were able to find positive messages in their service.

“I ended up talking to a group of students I really would’ve never come across on campus,” Aman Johnson says. “Now we all have a bond of some kind.”

Others found that what they experienced during their time in Detroit changed their way of thinking.

“This trip was an extremely humbling experience. There were kids that were going through things at home, but came to school with a smile on their face every day, so you wouldn’t even know they had problems,” Caitlin McCreary, freshmen international business major, says. “That shows real tenacity and strength that hopefully drives these students to do well in their futures.”

Gaddis experienced many of the same stories her volunteers discuss during her two years of service in Chicago. It was the change from a volunteer role to a leadership role that impacted her the most this time.

On March 14, the evening of the volunteers’ departure back to Washington, D.C., Gaddis stood in front of her volunteers in one of Detroit Mercy University’s dorm lounges.

“You know, I kept a journal of this trip.” Gaddis told the volunteers. “On Sunday, a day after we arrived in Detroit, I wrote ‘Damn, I don’t think they like me much.’”

The room erupted in laughter.

“No, seriously, I wasn’t sure if I was making the right choices as a leader,” Gaddis explained. “But last night, I wrote in my journal, ‘Damn, I think they might actually like me.’”

The room erupted in laughter once again and when it quieted down, she continued.

“And I hope you do [like me] because you guys really grew on me more than you know,” Gaddis said. “Your perseverance and dedication to service make leading you guys a blessing. I would definitely do it all again.”