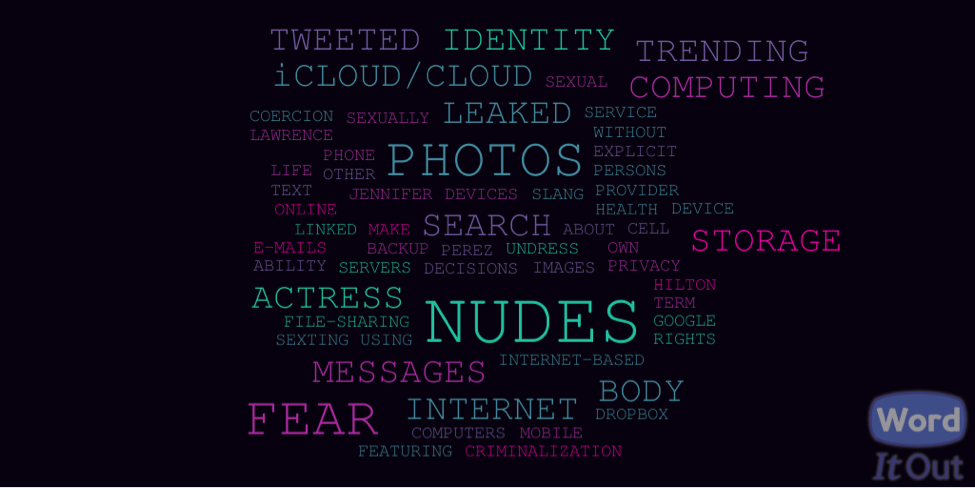 The iCloud Rains: What the Celebrity Photo Leak Means for Everyone

It goes without saying that in America sex sells, especially when dealing with celebrities. Stories of the occasional sexting picture circulate quickly enough, but when it involves numerous celebrity photos at once the news becomes a social media sensation and a matter of technological safety.

Response to the mass leaking of celebrity nudes on the Internet was instantaneous.  A hacker allegedly stole the images through the iCloud accounts of various celebrities on Labor Day morning and posted the images on the popular forum site 4chan.org.

Hollywood hasn’t seen an invasion of privacy of this magnitude in a very long time. The targeted women, including Jennifer Lawrence and Kate Upton, have been both pitied and criticized as news and pictures spread. Many actresses were quick to claim a number of the photos as being fakes, but that didn’t slow down the media.

Bloggers and entertainment journalists were quick to sensationalize the news, creating a media circus in a few short hours. Gossip blogger Perez Hilton quickly tweeted Jennifer Lawrence’s photos, which were all real, according to a spokesperson.

Ingrid Sturgis, associate professor, new media, at Howard University, shares her opinion on Hilton’s actions. “He is not a journalist,” Sturgis said.  “He’s trying to promote his blog. … He’s looking at it for one purpose only, and it’s not to serve the public interest.”

In this day and age, sexting, nude photos and Internet hacking aren’t uncommon issues, but let’s take a deeper look. People of all ages and backgrounds are putting their most intimate photos and sensitive information on mobile devices, which means that they can end up in the cloud,” Sturgis says. “So you’re always in danger of having some of your information stolen the minute you leave it on something other than a piece of paper.”

“When you’re doing something, you want to document it,” she says. “It’s generational only in that it’s on a [smart] device, but people have been doing this for years.”

The Social Side…
Celebrities and Twitter users alike have expressed indignation about the breach, while others sensationalized the news. British actress Emma Watson tweeted: “Even worse than seeing women’s privacy violated on social media is reading the accompanying comments that show such a lack of empathy.”

Dylan Sprouse, a Disney child star and previous victim of leaked nudes, makes his opinion clear when he tweets on the issue: “How about this for a change: Exactly none of these celebrities are ‘sluts/whores/bad role models’ for having private photos of them stolen”

How about this for a change: “Exactly none of these celebrities are ‘sluts/whores/bad role models’ for having private photos of them stolen”

Actress Lena Dunham appeals to the public and raises discussion about body rights: “The way in which you share your body must be a CHOICE. Support these women and do not look at these pictures.”

Some women involved tweeted out jokes or messages of anger and disgust. Actress and singer Victoria Justice writes a tweet that both set the facts straight while still making light of the situation. “These so called nudes of me are FAKE people. Let me nip this in the bud right now. *pun intended*”

These so called nudes of me are FAKE people. Let me nip this in the bud right now. *pun intended*

This raises a big question about the way that our society views women and celebrities. Is gender a major factor in how people view the situation? Sex sells in Hollywood, but the growing number of situations where women suffer the brunt of hacking or leaked information should be startling and worrisome.

The spreading of naked photos, texts and other sensitive information belonging to celebrities is a constant in today’s media, but does that fact excuse the action?

No, says, Erica Taylor, assistant professor at Howard University and a crisis management expert, but celebrities and their teams “need to be more aware of the potential consequences … more than the average person.” Taylor also recommends that celebrities consider forming or updating their crisis communications plans considering that unintended publicity of sensitive information or situations is a serous probability in today’s world.

Like Sturgis, Taylor sees hacking and the leaking of personal information to be a growing concern shared by big-time celebrities and everyday people alike. The photo leak “is a prime example of the fact that in this digital age we have little to no privacy,” she says.

This incident is a matter of technological safety. Online storage areas like iCloud or Dropbox make it extremely easy for hackers to invade our privacy and steal our information. Maybe we should stop leaving everything in the almighty cloud?

In a recent statement, Apple addressed the worries of consumers and the media: “To protect against this type of attack, we advise all users to always use a strong password and enable two-step verification.”

Apple’s iCloud is a modern monster of convenience, connecting iPhones, iPads and iMacs into one condensed mass of information.  This includes sensitive documents, videos and, of course, photos. While it would be simple to blame the hacker’s invasion on this modern combination, it is important to note that investigations are ongoing.

Some people believe that the cloud the only place to store their data and that it will grow as a resource, Sturgis notes.  “People say that it’s very secure but you have to make sure that you employ the security,” she cautions.

“If your work is in the cloud, then it can be accessed from anywhere in the world. If there’s an opportunity for someone to break into cloud storage … and they have the capacity to exploit it, your work could be in danger.”

A number of the celebrities’ photos were years old and probably already deleted from their Apple devices. That’s why some blame Dropbox as a culprit along with iCloud, but the answer is still unknown.

Jasmine Catchings, a 19-year-old public relations major, takes it all in stride. “The power that Apple has over the public will ultimately triumph over their frustrations with the super company,” Catching says. “Folks say they don’t like it or trust it, but as soon as the newest phone is released they’ll be the first ones in line.” Despite the breach, Apple set records with the recent release of its iPhone 6.

But the questions remain: Are our smart devices really all that smart? And how can we protect ourselves, and our information in the new digital age?

Professor Erica Taylor gives some positive predictions on the matter. “I think that even though historically developers lag behind the hackers … there is plenty of opportunity to invent and utilize new things and figure out new ways to create at least basic safety online,” she says. “The expectation of privacy is going to continue to decline, but we should feel at least somewhat safe.”

Amylia Johnson writes about the Internet, social media, gaming and books for 101Magazine.net.

Here are a few words that are now household terms.

Jennifer Lawrence: shortly after the photos were leaked, gossip blogger Perez Hilton not only tweeted about it, but also linked to photos of the actress. Lawrence’s name predictably became a trending search term on Google.

Nudes: slang term used for photos featuring one or more persons in various stages of undress.

The Cloud/Cloud Computing:  “a type of Internet-based computing, where different services — such as servers, storage and applications — are delivered to an organization’s computers and devices through the Internet.”(webopedia.com)

Dropbox:  “a cloud storage provider (sometimes referred to as an online backup service) that is frequently used as a file-sharing service.” (techtarget.com)

Body rights: the ability to “make decisions about our own health, body, sexual life, and identity without fear of coercion or criminalization” (Amnesty International)