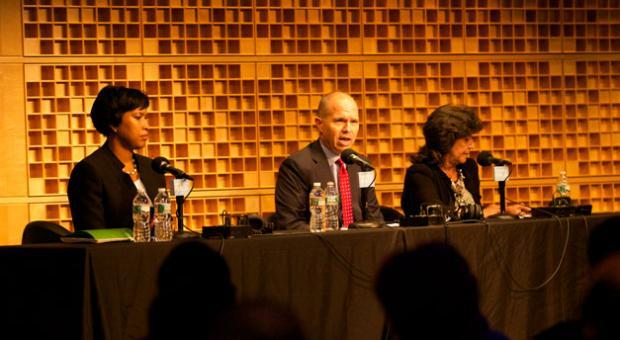 With a raucous crowd of supporters chanting their candidate’s name, hoisting signs in front of the new National Public Radio building on North Capitol Street and vying for the attention of passers-by, the three candidates for mayor of Washington, D.C., embarked on their second debate, hosted by Kojo Nnamdi of WAMU American University Radio.

Democrat Muriel Bowser, who entered the debate with an eight-point lead over fellow Washington councilmember David Catania, according to a recent poll by Economic Growth D.C., stressed the importance of maintaining affordable housing options even as the city goes through dramatic business expansion and gentrification. She said that while the improvements to the city are good, the next mayor must address the anxiety facing those struggling to stay in the city.

She also talked about her track record representing the District’s fourth ward, including the Walter Reed hospital project and an initiative to create economically diverse communities with quality and affordable housing.

Catania, an attorney and member of the council since 1997, touted his management experience with the multinational company, M.C. Dean, adding that the city needs a mayor who understands the private sector. He said hospitality, health care and education were critical issues for him.  He also said the city’s expansion must be tempered with policies that protect long-time residents.

“There are cranes in the air but problems on the street,” he said. “There must be a more transparent way to incorporate communities affected in development decisions.”

While Catania has not committed to follow through with Mayor Vincent Gray’s proposal to redraw school boundaries and feeder school patterns, he says that he will work with D.C. public school chancellor, Kaya Henderson, to improve middle schools in order to see better performance from D.C. high schools. He said he won’t limit the growth of charter schools in the District.

Schwartz, a former city councilmember who is running for mayor of D.C. for the fifth time, talked up her experience in education as a former special education teacher and member of the Washington Board of Education.

“We’ve got to get our schools up to snuff so people can have the education to get good jobs,” said Schwartz, who trails far behind the other candidates according to a recent poll.

She also said that she would offer incentives for people who have be forced to leave the District due to high costs to return to the city.  She would give incentives to those who offer more affordable rental options in the city.

Catania, the city’s first openly gay mayoral candidate, attacked Bowser’s claims that she had been effective in helping guarantee affordable housing, accusing her of having a lack of oversight as chair of the city council’s Committee on Economic Development.

“What we have during this campaign is the difference between rhetoric and record,” Catania said.

Catania, who chairs the city council’s committee on education, also criticized her for failing to enact meaningful education bills.

Catania’s criticism prompted a sharp response from Bowser, who interrupted him—as she did on several occasions— calling many of Catania’s claims “just not accurate”.

“You know, I’ve had about enough of Mr. Catania and his ‘uninformed,’ and ‘She doesn’t have the intellect,’ and ‘She’s not smart’ and ‘She’s a puppet,’ or ‘The Democrats in the city are puppets,’” Bowser responded angrily.  “People have had it.”

Schwartz separated herself from Bowser on issues like marijuana, where she is not in favor of the measure to legalize certain amounts of it recreationally in the District.  She also opposed plans for a new soccer stadium, opposing the land-swap deal.

Catania, a former Republican who supports a cautious approach to the legalization of marijuana, also opposes the land-swap deal.

The debate’s host, Kojo Nnamdi, was joined by reporters Patrick Madden, also with WAMU, and Tom Sherwood of NBC4 television.  The trio asked questions on subjects from charter schools to housing to education to transportation for people with disabilities.