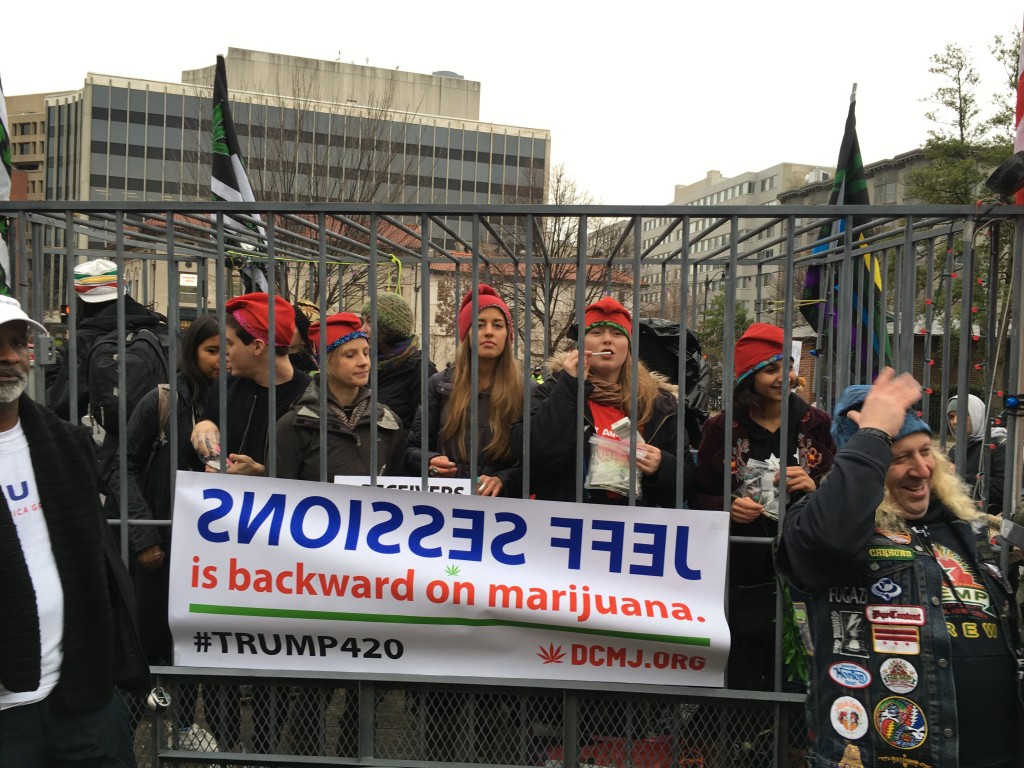 WASHINGTON (HUNS) – While a few blocks away thousands of protesters massed for issues like climate change, Russian interference in U.S. politics, civil rights, women’s rights and wealth inequity, hundreds gathered against the frigid wind and rain in DuPont Circle in Northwest Washington as part of the unofficial Donald Trump inauguration activities with the goal to “Make America High Again.”

DCMJ, a Washington organization that has promoted and won legislation in the nation’s capital to allow legal marijuana consumption and possession in small quantiles, led the effort under the banner #Trump420.

Larry Hartzell Jr., a #Trump420 volunteer, said that the event wasn’t about political parties but was about cannabis legalization. Hartzell said he fears Alabama Sen. Jeff Sessions, Trump’s choice for U.S. Attorney General, will be “taking us back to the Dark Ages,” because Session opposes the legalization of cannabis.

DCMJ passed out free joints to all those in the crowd who identified themselves as at least 18 years old. The group said it planned to hand out 4,200 joints. The crowd then paraded down to the National Mall, with the intent to “light up” four minutes and 20 seconds into Trump’s speech unless he states that he will fully support cannabis legalization.

Maggie Fauver of Delaware NORML, a state chapter of the National Organization of the Reform of Marijuana Laws, said she was drawn to the event because she wants the incoming administration to understand the importance of cannabis as a form of medical treatment. Fauver said she would like to send a message to the Trump administration.

“Patients’ rights are important,” she said. “It should be between the patients and their doctor to decide which treatment is best for them.”

The event attracted supporters and protesters alike. Those against the legalization argued with the large crowd about why the drug shouldn’t be legalized, citing religious texts and their personal experiences.

Jade Moat, who said she is a medical marijuana card holder, said she came out to the event because “the same rules that apply to me should apply for recreational use.”