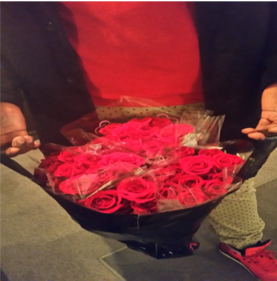 A Valentine’s Day Rose Giveaway for Peace, Love and Positivity

Valentine’s Day didn’t mean a lot to me, until I saw a YouTuber’s rose giveawayfor random women in California. I was inspired by his determination to give women a reason to smile with his token of appreciation for life’s ups and downs. That video was powerful. I decided to add my own twist and give back on Valentine’s Day.

Most of time when this day came around, I would either be single or have relationship issues. But the media hypes this holiday as a day of loving and “look at us” (if you’re in a relationship). This day can bring out a lot loneliness and sadness regardless of how it’s being displayed. My motto is all about Peace, Love and Positivity. Apply all of these variables, and you get “Joseph’s Rose Giveaway.”

February 2014: I started by dressing up in my suit and handing out 60 roses via Metro, since I didn’t have a car. I gave out roses in Washington, D.C., and Virginia. I got lots of hugs, a few numbers and tons of smiles.

February 2019: I went all out for the fifth anniversary of my rose giveaway, handing out more than 100 roses. I could honestly say that I may have invested at least $800 into that day — including the outfit.

Overall, I’ve given out more than 300 roses throughout the DMV area for Valentine’s Day. With five years under my belt, I want to continue this project for as long as I live. To me, this world is corrupted and evil. Most people in my age group are so obsessed with social media and highlighting the flaws that people possess and their wrongs. While I can’t change the world, I know I can change a community or a room. By living my message of Peace, Love and Positivity and continuing to bless people with love and respect, this project will get the attention it deserves.