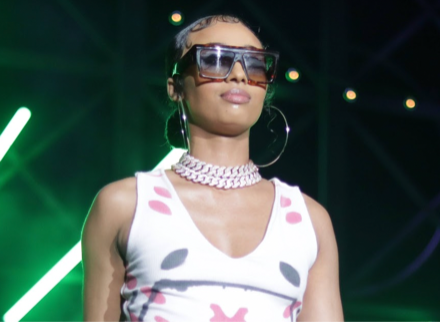 This year’s Springfest theme of “Bison in Wonderland” was combusted at the Madhouse Fashion Show. With the help of the host, Rubi Rose, students were immersed in a dream-like fantasy. Fevers were raging when models arrived in figure-fitting sets and dresses while gracing the stage in a monstrous manner.

Those walking strutted in character maintaining a poised act with a demure demeanor. Members of Elite and Models of the Mecca made a huge impact on popular brands Hubane and Insignia among others.

But the largest conversation topic remained the ring-like set behind each onstage act. The shape-shifting circular feature provided a nice backdrop with color and cover for the incoming performers. This year’s show uniquely featured dancers who brought an extra sense of pop and spice to the stage.

Their style ranged from lyrical to Caribbean winding which engaged the audience. But nothing brought more of a smile to their faces than acting student Cameron Hodges. He served as the wild, wild ringleader for the show bringing jokes, jest, and jovial energy to the crowd.

The fashion show was the finale for the week of activities hosted by the Undergraduate Student Assembly in the name of Springfest and many students left feeling pleased.