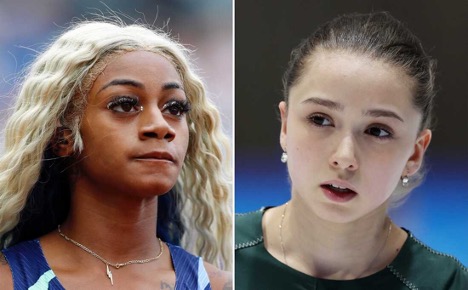 Last year many across the world witnessed the flamboyant Sha’Carri Richardson, 21,  win the women’s 100-meter race at the U.S. track and field trials in Oregon.

Many fans were in awe as Richardson seemed to remind them of a tiger, her quick feet, toned body, and resilience really caught the attention of celebrities, athletes, and politicians.

Unfortunately, Richardson’s rapid road to stardom was dramatically put on pause as the Olympics suspended her for testing positive for THC. In an interview with NBC News, Richardson announced:

“I was just thinking it would be a normal interview,” said Richardson. “But to hear that information coming from a complete stranger, it was definitely triggering, it was definitely nerve-shocking.” Richardson said she then used marijuana to deal with that distress, explaining: “I know I can’t hide myself, so… in some type of way, I was trying to hide my pain.”

This sparked a lot of controversy as people agreed or disagreed on the consequences that Richardson should endure. Olympic Gold Medalist soccer player Sydney Leroux said, “We need to look at what athletes are being given to deal with the mental and physical demands of their sport. If Xanax and opioids are legal, then marijuana should be too.”

The backlash did not stop here. One year later, 15-year-old Russian figure skater Kamila Valieva is opening up the major question, “Why does racial equality divide Sha’Carri and Kamila?”

Valieva was representing Russia as the best figure skater and continuing their streak of two consecutive Olympic gold medals.

Her loss only allowed us to see how overwhelmed and pained she was by the public’s opinion on her doping scandal—testing positive for three heart drugs and still having the opportunity to skate.

The International Olympic Committee (IOC) has responded to #ShaCarriRichardson after she called the organization out about double standards at the Beijing Olympics regarding drug testing. Mark Adams, an IOC spokesman, addressed comparisons telling @YahooSports, “You can’t talk about double standards in relation to Russian and American athletes. Each case is individual.”

I corresponded with Howard University student, Morghan Manuel, who is currently a dancer for College Hall South.

A.C. How do you think drugs impact sports? Do you think there’s a stereotype toward black people?

M.M. I think the use of drugs in sports is really undermining the value system of fair play. It gives the sport itself a negative rep as well as a damaging effect on a team’s performance. I believe any area, field, environment, and practice that showcases black talent and success, will unfortunately always be systematically stereotyped and looked down upon. They hate to see us win and sit in positions of power in the world!!!

A.C. Sha’Carri Richardson was banned from performing at the Olympics, yet Kamila Valieva was allowed to skate while she was caught doping. Do you believe this was fair? Do you think that race has anything to do with his decision?

M.M.Strong yes, iffy on the no, looking at both of these females and their situation. It could be said that It was unfair for Sha’Carri Richardson to be banned for what I like to call a “celebration sesh.” And to see Miss Valieva get the second chance and opportunity to still perform after being caught for doping. And I’m not saying that either one of those ladies were in the right for their actions. Consequences are consequences. But I’m not going to turn a blind eye either towards the unnecessary extent the Olympics took with Miss Richardson’s case. I00% agree that If she were a white woman, the Olympics would have let her race with minimal efforts of trying to punish her drug use. Just the way they handled Valieva’s drug test. My confusion…they didn’t at all!”

A.C. How should players be treated and what do you think could be prevented in order for everyone to feel equal?

M.M. Man, if that question could have an answer for our political and social setting today. Then I wouldn’t be asked to answer this. There are many ways to incorporate fair treatment, especially in a world that doesn’t have much of that. But until people decide to live in the moment and (excuse me for my language) get their heads out of their ass. I do think in order for players to feel equal within their playing field, better implemented rules and protocols and be put into place. The Olympics have been accused a number of times of not redefining procedures and making all things equal no matter the situation. If you are going to ban one player for any illegal drug use then all players following need to be banned. If that is the extent of practice that needs to be enforced for people to feel more comfortable with having fair chances, no matter the predicted outcome.

This all comes down to the fact that there must be change in all that is given to us. Our color should not differentiate our rights of being able to play in a sport that is admired and played by wonderful, talented people.