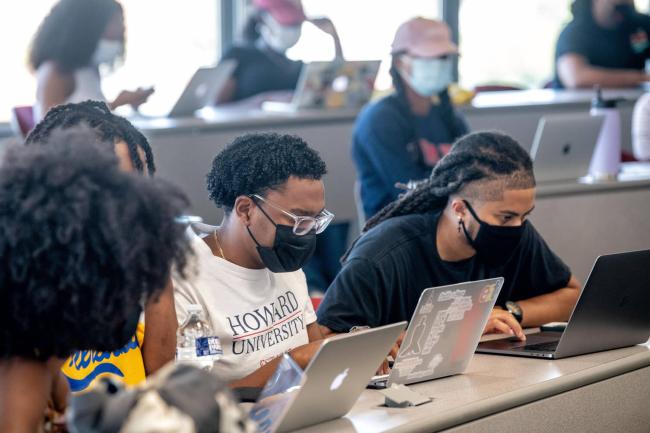 With the fallout from a year of remote learning, upperclassmen graduating, and now this being the first academic year back on campus, we are in the midst of quite a different and unprecedented situation for the students and on-campus life at Howard.

This academic year, Freshmen and Sophomores are the ones primarily living on campus while Juniors and Seniors are living off-campus as a result of a much larger Freshmen and Sophomore class that were admitted since the pandemic began in 2020. The Sophomores, in many ways, are in the same boat as Freshmen being that this is their first year on campus, and are trying to learn and acclimate themselves to Howard’s surroundings just like their junior class. In essence, there are two Freshmen classes and they are without upperclassmen presence, at least to the level that previous incoming classes had, to guide them.

What does that mean for the existing on-campus ways and traditions that existed previously at Howard? It is certainly an interesting dynamic to examine. Is there a possible risk of some of these pieces of culture being lost?

What are the perspectives of students, upperclassmen, Juniors and Seniors, and underclassmen, Sophomores and Freshmen respectively? One senior stated ‘’I think there is an equal disadvantage between the upperclassmen and underclassmen in that while the Freshmen and Sophomores are missing out as far as social events, the Juniors and Seniors have gotten the short end of the stick not being given housing on campus. It leaves us out of the loop and we’re not able to be aware of things that are happening. Last semester, many of us walked around and saw a random protest (Blackburn Takeover), that we just found out about’’. Another Senior told me there is a lot of confusion, that there is a feeling of being disconnected, and that upperclassmen have to already have a friend group otherwise they are out of luck’’. This should certainly never be the case for the upperclassmen’s experience.

I asked one Sophomore who lives in East Towers, which before the pandemic had been home to Juniors and Seniors and now is almost exclusively Sophomores, if he feels with his situation that he is missing out on anything to which he said ‘’I will say it is a different experience…When you look at Homecoming, with the restrictions, it was different but there’s give and take in everything. So, maybe in some aspects, I’m missing out’’

I spoke with graduating Senior Nigel Johnson, former president of the Howard University College Democrats, who provided this positive outlook about the underclassmen, ‘’I think HU24 and HU25 are going out of their way to create new traditions, establish new things on the University and make their mark. And, those traditions are probably gonna last for a very long time.’’

With Howard’s on-campus culture having a rich legacy, it is imperative that all students are given the opportunity to build community and continue in passing down those memories and traditions. Perhaps, we can say the culture will continue to grow and develop with each new class.