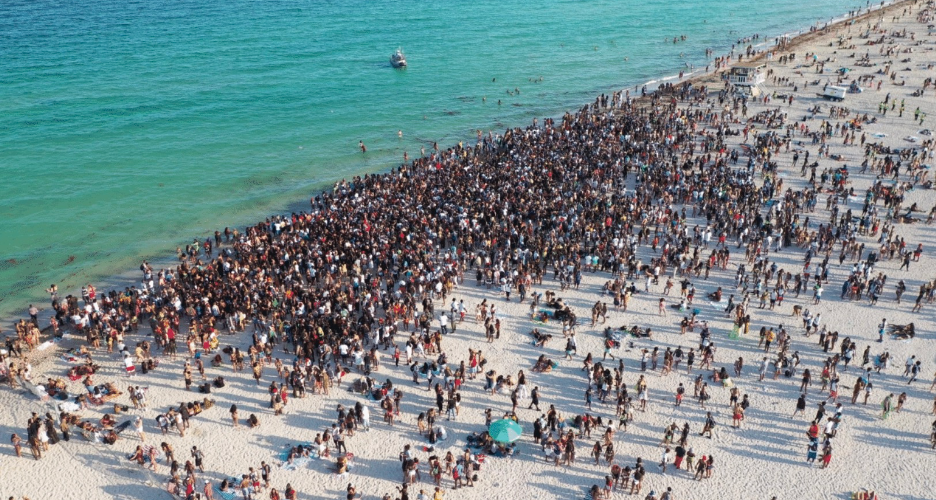 The Bison community welcomed Spring Break with open arms as students took time for themselves and their mental state.

Howard Bisons took over Miami as friend groups flew straight out of the nation’s capital straight down South to the 305. As Howard students began flying in day by day, Miami began to feel like a Howard linkup for its students. Scholars met up with other young adults in South Beach Miami and enjoyed food, music, warm weather, and parties. Travelers from all walks of life took in the breath of fresh air as they exposed themselves to the Miami culture. Alumni, upperclassmen, and underclassmen united as they toured food spots, took pictures, and formed acquaintanceships with other college students. Pictures on Instagram captioned “M.I.A. in the MIA ” began flooding the timelines of the Howard social media community. Young adults walked the strip, others hung out with rapper Swae Lee, and some soaked in the shallow waters of the Atlantic Ocean. Soon, the sunny weather was short-lived as Sunday approached and Howard students began packing for their return back to D.C. As the next batch of spring breakers touched down in Miami’s International Airport, some Bison were left stranded in the airport due to inclement weather up North. Sophomore, Michayla Maxwell, along with two friends, were set to leave Miami Saturday evening  March 12th, but ended up leaving Tuesday morning March 15th. The airport, packed with young college students traveling in and out, became overwhelming and soon grounded students from the highs they felt from being in South Beach.

While some students bathed in the sun on the white sands of South Beach Miami, some went back to their hometowns and bathed in comfort. Sophomore Journalism major, Amarie Bentancourt, stated: “I went back home to go see my family and while I didn’t go on vacation, it was kind of like a vacation for me because I was away from the stress of school and campus life. And I was just able to decompress and relax and just be around my loved ones.”  Like Bentancourt, a lot of students went back home and enjoyed time with family and friends. Other students were excited to go back home and indulge in great eats. Jamison Darden, a Biology major from Atlanta, Georgia, said “it was good to finally eat some good food with good seasoning that I knew was going to hit.”

Here at The Mecca, students took time to explore D.C., catch up on sleep, and enjoy the silence of the dorms. Sophomore, Architecture major, Journey O’Neal, said during spring break he “took the time to explore D.C. the way I’ve always wanted to.” He then went on to say “I hung out with close friends who I knew were still on campus, and we found the best spots in D.C. to eat, and [we] went to a new spot everyday. This helped me truly appreciate the culture of D.C.” Howard students are often very vocal about their distaste with D.C. so to know students actually took the time to embrace the DMV is beautiful.

Whether students went back home; stayed on campus; or took a trip somewhere, vibes were taken in from all different angles. From sipping a blended drink out of a pineapple to eating wings from a local food spot, students felt at peace. Spring break 2022 definitely left its mark on the Howard community. Hell, it even kicked off the start of Spring festivities. If students were unsure of all that spring semester has to offer before, spring break definitely brought them some type of clarity.