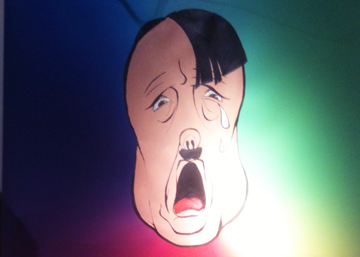 But Is It Art Fair? Goes Outside the Canvas

The weekend-long DIY (Do It Yourself) But is it Art? fair was organized by D.C. residents Alex Ventura, Stephen Crouch,  both art handlers, and Victoria Milko,  a University of Maryland student. DIY is unique from other art because there are no boundaries and it is very experimental. The art does not fall into traditional categories, such as cubism or impressionism.

The organizers planned the fair the same weekend as the (e)merge art fair held at the Capital Skyline hotel.  Although (e)merge had a $15 cover charge and featured more than 80 international artists, But is it Art?  offered free entry and showcased  local up-and-coming  talent.

“We’re the underdogs for the weekend versus the other art fair,” said Crouch. “We just wanted to provide young artists and their art with a place to show their creativity.”

The free event raised money through a Kickstarter page, an online fundraising platform. The funds were gained in four days. The majority of the money, $1,400, rolled in 48 hours before the fair for a total of $2,000  and 35 donators.  However, the organizers of But is it Art? aren’t new to planning art shows, this was their second art fair this year.

“Since our February show, support has grown and the money came from artists, family, friends, media, benefactors and just people with big interest in art,” said Milko.

One captivating piece, created by artist Joseph Orzal, 25 and  District of Columbia resident, featured two paintings.  Adolf Hitler crying on one canvas and Malcolm X with the quote ‘Tired of the troubles?’ beneath him on another canvas.  Along with the piece was a bookshelf filled with books that were free for anyone to take with them.

“I have been trying to inject reading into my work lately because people just aren’t reading. Hitler is crying because people are not educated,” explained Orzal. “The ‘Tired of the troubles?’ quote is saying to people if you have any troubles you should read and learn of them and maybe that might help. If people take the books from the shelf, then this creation will be a success.”

This was the first installment of the “But is it Art?”  fair and the organizers are hopeful to continue to host it, or one like it annually.

“Our aim was to do a strong contemporary art show to show that it’s possible to do it with a DIY ethic and shoestring budget,” said Ventura.

Overall, 25 artists showcased their artwork to the community and earned a great reception.

“There is a lot of beautiful art and I’m really impressed,” said attendee Zach Callahan.  “I’m glad people are doing things like this to contribute to the art scene in D.C.”