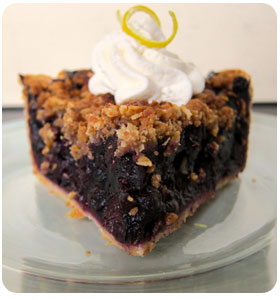 Pies on the Rise

The cupcake’s distant relative, the pie, may take over as one of the biggest food trends of 2012 .  Both innovative and old fashioned, pie shops are popping up in major cities across the country, from Seattle to Greensboro, Ala.  While these shops are all unique, they also have one common goal: to create some of the most beloved pies in the nation.

In District of Columbia, three sisters are planning the ultimate pie bakery to be named O’B. Sweet, in the heart of
Georgetown.  Erin, Alli, and Cat Blakely are Virginia natives who grew up on the sweet tradition of canning peaches and baking
homemade pies.

“We started out in Virginia, baking in our mom’s kitchen,” said Erin.  As they got older, all three girls took separate paths, but baking brought them back together. Their pie flavors are based off  old and new recipes from family and friends.  O’B.Sweet’s most popular flavor for fall and winter is the bourbon chocolate pecan pie made with Chambord liqueur.

“It’s like taking the pecan to another level,” said Erin.

O’B. Sweet’s pride and joy is their cuppie,  a mini pie  intended to be eaten like a cupcake. Erin explains the cuppie was created when the sisters decided they needed something more convenient for customers on–the–go.  It is travel–friendly and can be served as an event favor for weddings, baby showers and other special occasions.  Erin believes that the cuppie differentiates them from other pie shops.

Across the nation, in Seattle, Hi 5 Pie, goes by the motto “It’s Vintage. It’s Modern. It’s Delicious!”  Owner, Dani Cone, sights her love of eating pie and drinking coffee as one of her inspirations for founding the pie shop.  She passionately admitted, “my Grandma makes the most amazing blackberry pies!”  Cone also owns three coffee shops named Fuel Coffee.

Hi 5 Pie  has many creations from the cutie pie, a miniature pie, to the piejar, a pie baked in a tiny mason jar and the piepop, a pie lollipop.  “Oh my gosh. It sounds so cute!” exclaimed Cone.

Among the various flavors on the Hi 5 Pie menu, the marionberry stands out as a local favorite.  The berry is almost exclusive to the Northwest, growing only in Oregon. Cone described the unique flavor of the marionberry as a mix between a blackberry and a huckleberry, but when comparing it to blackberries said, “it has a little more zip.”

Traveling to the south east Greensboro, Ala., PieLab describes themselves as a “pop-up café, studio and civic clubhouse.” It was founded in 2009, through a partnership between a local non-profit, Hale Empowerment and Revitalization Organization, Inc. and a design collective, Project M.  PieLab’s goal is to satisfy customer’s taste buds while generating conversation in hopes of creating social change.  As they put it, “Pie + Ideas = Conversation. Conversation + Design = Social Change.”

PieLab bakes a strawberry rhubarb pie. Rhubarb is a vegetable that is naturally sour and usually heavily sweetened in desserts. The vegetable is one of the many locally grown foods  PieLab prides themselves on using in their pies.

O’B. Sweet, Hi 5 Pie and PieLab have all received recognition from the media and O’B.Sweet has an upcoming television project of their own. Upon O’B.Sweet’s M St., in D.C., location-opening in November, the three sisters will take on a reality television show. Combining the taping of the show and  the grand opening makes the sisters a little nervous, but nevertheless excited, said Erin.

Each pie shop has its very own story. The O’B.Sweet sisters thrive off  family tradition.  Dani Cone creates every flavor with her love for pie, and of course, her grandma in mind.  Pielab strives to combine conversation and dessert to create social change.  Yet like the cupcake craze of recent years, these pie shops all face a challenge: putting a fresh twist on an old-fashioned classic.