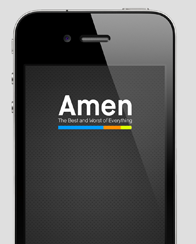 The rise of social media has swept the nation and does not look like it’ll stop anytime soon. Amen is a new site that will change how users interact with each other. The brain child of Felix Petersen, Florian Weber, and Caitlin Winner. The idea of Amen came during a dinner in February of 2011, the three were discussing a consumer service project that allowed users to list their top five best and worsts in an assortment of categories. Numerous amounts of test were done and the results showed that users were easily able to choose a number one choice, but when it came to a second or third choice, users did not have an answer. Hence, the idea of Amen was born.

As ideas were passed back and forth, the creators realized that after test results of their product showed that users typically got excited for a single person, place, or thing. The three founders put their heads together and thought to themselves, “What if you could easily post a single opinion and let others agree or disagree, ultimately allowing the lists to be socially created?”

Starting Amen was a struggle, work was done out of a rented single room workspace with only three members. As the founders continued to build, they moved into a hotel room and the team grew from three to six. From there they settled into their current headquarters located in a historic river-view commercial space.

Amen was first available to a small group of beta testers over the web and Apple’s iPhone Operating System (iOS) in August 2011. The Amen team have created a product that utilizes ground breaking designs in order to gather data on the user’s experience.

Amen has been growing rapidly as celebrities, such as Ashton Kutcher, have created accounts on the site. Kutcher said of Amen, “Definitive statements are the kinds of statements that relationships are built over.” When speaking with Amen’s Marketing Manager, Ashley C. Metz , she had a similar response, “Amen is a very different sort of network.  Amen provides structure around posts and the ensuing agreements and disagreements to inspire and entertain people.  Others’ provocative statements are the spark to a short and fun exchange.”

Look for Amen to continue to evolve as Metz says that, “In the next year, expect more features and updated utility.” Amen is now available in the iTunes app store.