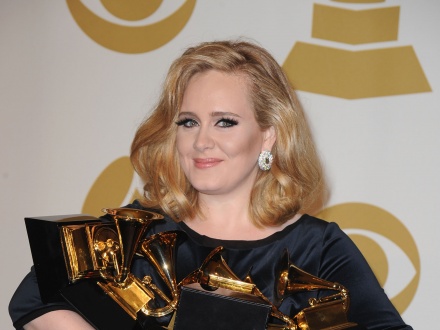 Only one word came to mind when reminiscing about the 54thAnnual Grammy Awards: geriatric.

Hardly any award recipients were questioned on whether they deserved their wins. The show focused heavily on the past, featuring tribute after tribute to honor The Beach Boys, Tony Bennett, James Brown, Don Cornelius and more. All in all, it was a safe show. With just a few eyebrow-raising performances peppered into the mix, a majority of the evening’s musical sets were rated-G, to say the least.

Unfortunately, it was more than likely due to the recent loss of one of Hollywood’s greatest vocalists, Whitney Houston. The sense of mourning hung heavily in the air.

This year’s host, LL Cool J, tried his best to push past the strong emotions in the room and, after a brief prewritten prayer, insisted that the evening be filled with joy.

THAT IS EXACTLY WHAT THEY DID. Aesthetically favoring Elvis Presley, Bruno Mars kicked off the festivities with a mood-lightening James Brown tribute.

He was followed by Grammy underdog Chris Brown, who was able to deliver two performances during the evening. Brown fell short of viewer expectations with his neon, stair-climbing performance of “Turn Up the Music” and “Beautiful People.” The young crooner took home a Grammy for Best R&B Album.

Next, Jay-Z and Kanye West won the Grammy for Best Rap Performance for “Otis.” Awkwardly enough, neither of the two were present to accept the award.

Rihanna, who was repeatedly praised for her low-cut, red-carpet attire on Twitter, delivered a flash mob-style performance of “We Found Love” along with singing a new collaboration with Cold Play.

Taylor Swift delivered a number that some Twitter commentators labeled as a “butter-churning performance.” After singing “Mean” (which helped her receive Grammys for Best Country Solo Performance and Best Country Song), Swift received a standing ovation, at which she was visibly shocked.

Nicki Minaj delivered an undoubtedly unforgettable performance; however, it’s hard to determine if it falls into the category of “good” or “bad.” While assuming the role of her alter ego “Roman Zolanski,” Minaj released her inner-Broadway performer (and inner possession) with the noticeably Lady Gaga-inspired performance of “The Exorcism of Roman.” The relatively blasphemous display, which was decorated to resemble the sanctuary of a Catholic church, raised many concerns and caused controversy among religious viewers.

ON A POSITIVE NOTE, pop/soul artist Adele took it all home and rightfully so. With a calm disposition, she performed “Rolling in the Deep,” causing an enthusiastic and long-lasting standing ovation.

After a tear-jerking acceptance speech toward the end of the show, Adele humbly accepted and carried home six Grammy awards, including Best Pop Solo Performance, Best Pop Vocal Album, Song of the Year, Best Short Form Music Video, Record of the Year and Best Album of the Year.

The moment that viewers were waiting for, the tribute to Whitney Houston, hit a soft spot in both the audience and the performer. Jennifer Hudson, the sole singer in the dedication, delivered a reverential, borderline gospelish rendition of “I Will Always Love You.”

Visibly shaken, at the end of the song, Hudson tailored the words to say, “Whitney, we love you.” Although viewers initially wanted more from her, Hudson’s play-it-safe performance earned the respect of Grammy attendees and did the fallen legend justice.