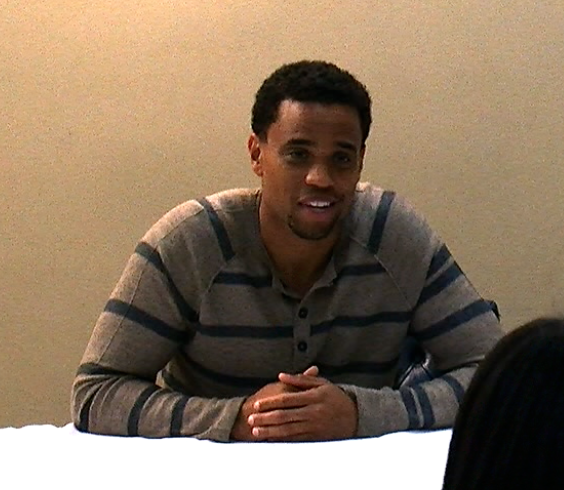 Michael Ealy has been traveling around the country to promote his latest movie, Think Like a Man, the film adaptation of Steve Harvey’s best-seller, Act Like a Lady, Think Like a Man. Before his Q&A session with fans at Howard University, 101 Magazine sat in during his press conference, where the University of Maryland graduate gave relationship advice and spoke about the film.

“In a relationship, it would be strategic and wise to understand how a man thinks,” Ealy said, in reference to the movie’s title.  “I don’t think a woman can actually think like a man. What makes women dope is that they’re thinking like women.  I think what we’re trying to do with the movie, and what Steve was trying to do with the book, is to give some sort of insight to how men think.”

The film is a “guy’s movie” that most men can relate to, Ealy said.

Ealy plays Dominic, whom he describes as a “dreamer” who learns to “man up.”  Dominic spends much of the film struggling to woo Lauren, played by Taraji P. Henson, despite his less-than-glamorous occupation.

“What I hope people take away is that sometimes the way people treat you matters more than what they can do for you,” Ealy said.  “Have a little bit of patience.  This person may end up being all you ever wanted and all you ever needed.”

That said, Ealy doesn’t necessarily believe that black women must lower their standards when dating.

“I’m not a fan of telling black women what they need to do,” he told 101, before adding, “I don’t think all black women have a certain set of standards for a man; I just don’t. I think if you as an individual are having a hard time dating, look in the mirror.  It might not be your standards, it might be your breath.”

Ealy also emphasized the importance of business knowledge for those seeking to work in entertainment.

“What I didn’t get when I was coming up in acting school was a class in the business,” Ealy said. “There’s no class on the business side of things, and as I’ve grown in this business, I’ve learned that it is a business, and it’s important to understand it as a business.”

While Think Like a Man may spark dating and relationship conversation, it is still a comedy, and Ealy encourages college students not to take dating too seriously.

“Don’t fall in love in college,” Ealy said.  “You’re way too young to be all lovey dovey in college.  If you break up, it’s not the end of the world.  You’ll probably fall in love a couple of more times before it’s right.  You might even get married before you get it right.  Just have fun. Be safe, but have fun.”