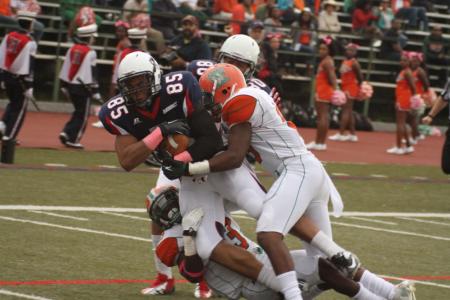 Howard Beats FAMU on the Road to Redemption

The Bison records back-to-back winds against the Rattlers for the first time in 10 years.

In a crucial game that many people highlighted on their personal schedules, the Howard Bison defeated the FAMU Rattlers 17-10 last Saturday to remain at the top of the MEAC standings.

Howard and Florida A&M were two of five undefeated teams in the conference coming into the game. Saturday’s game was also significant, because it was the first time in 10 seasons that the Bison recorded back-to-back wins over the Rattlers.

Last year in a miraculous fourth-quarter comeback, Howard upset FAMU 29-28 in its homecoming game in Tallahassee, Fla. The Rattlers traveled to Greene Memorial Stadium in Washington hoping to avenge last year’s loss, but they fell short as Howard advanced to 3-0 in the MEAC and an overall record of 4-1.

With FAMU now in the rearview mirror, Howard plans to maintain the momentum as the football team travels to North Carolina A&T for another conference game.

“We have a couple of hurdles, but we have to get over them,” quarterback Greg McGhee said in a post-game interview. “We’re still on the road to redemption.”

McGhee started against FAMU after coming off a four-game suspension over textbook allowances. He threw for 233 yards with one score through the air and a game-winning touchdown on the ground in his season debut as a starter.

On the opposite side of the ball, Howard’s senior linebacker Keith Pough led the defense with 17 tackles and broke the Football Conference Subdivision (FCS) record for most tackles for a loss.

“Records are meant to be set and meant to be broken,” Pough said. “Years from now, I want someone to break my record.”

Pough, the MEAC preseason defensive player of the year, has fashioned a collegiate career to become a 2013 NFL prospect. Although professional scouts are discussing his performance, Pough remains focused on what he hopes to accomplish during his last year as a Howard Bison.

“On the road to redemption . . . no shortcuts, no roadblocks, no detours,” Pough said.

The Bison have been using this motto throughout the season in hopes that it will inspire the team to win the Mid-Eastern Atlantic Conference championship.