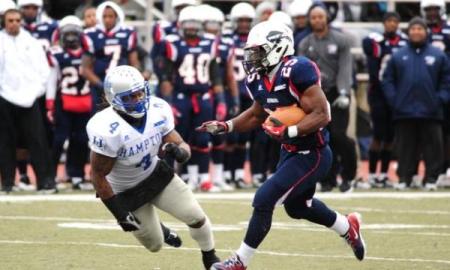 Howard vs. Hampton: The Clinching of a Winning Season

The 20-10 win is Howard’s second victory in a row over Hampton in the ongoing Battle for the Real HU.

In the “Battle of the Real HU,” the Howard Bison (6-3, 5-2 Mid-Eastern Athletic Conference) defeated the Hampton Pirates (2-6, 2-4) for the second consecutive year.

The 20-10 victory not only carved back-to-back wins over Hampton—the first time since 1980—but also clinched the university’s first winning season in nearly a decade.

“Beating Hampton is always on the top of the list,” head coach Gary Harrell said. “We want to win every weekend, but we understand the pride and tradition behind that win.” Howard lost 14 straight games against Hampton before Harrell took over last season.

Howard, which improves to third place in the MEAC, rose to the occasion by implementing a formula it instituted in last year’s matchup — abusing the ground game.

“Our game plan was to come out and establish the run,” Harrell said. “Last year was a great win, and we felt like we could do the same things against them this year and have some success.”

With the offensive game plan of attacking on the ground, senior running back Terrance Lefall recorded season-high numbers, rushing for 182 yards and a pair of touchdowns. The 5-foot-10, 210-pound back has had consecutive 100-yard games since his first game of the season.

“We just kept pounding the rock; they trusted in me to carry the team to victory,” says the Georgia native, who gives all credit to his offensive line.

Lefall literally has carried the team throughout the season as Howard remain second in the conference in rushing offense. Lefall returns to his home state this Saturday as Howard takes on Georgia Southern.

The Bison, who were selected to finish eighth in the conference, remain ecstatic about last Saturday’s victory, yet continue to stay on track as they plan to finish off the season strong.

“It’s a great feeling to come from eighth to where we are,” said an intense Harrell. “Honestly, we’re in it to win it. … Our goal now is 8-3. After we accomplish one goal, we want to reach out for another and keep climbing.”

As Coach Harrell put it, “The team finally came to the mindset that enough was enough.”