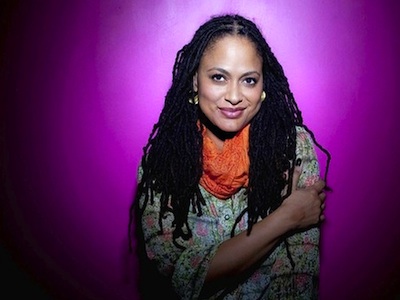 Not many people can say that they were “Best Director” at the Sundance Film Festival. Ava DuVernay humbly holds the title as the first African-American woman to receive the award, based on her new film “Middle of Nowhere.”

“It was too long in coming,” DuVernay said with great disappointment. “It’s 2012.”

“Definitely always have to give a tip of my hat off to the sisters who came before me,” she added. “Just because they didn’t win, doesn’t mean they weren’t the best that year; it just wasn’t the time.” Fortunately for DuVernay, it was her time, and “Middle of Nowhere” premieres in select theaters across the country on Friday, Oct. 12.

“Middle of Nowhere” is about Ruby (Emayatzy Corinealdi), a medical student who gives up her dreams for the well being of her incarcerated husband (Omari Hardwick). Ruby battles with a dilemma of a new love interest (David Oyelowo) and finds herself on an emotional road of self-discovery.

“I’m from Compton, and I’ve always really seen sisters struggling with incarceration and men being locked up,” DuVernay said. “I put all of that together to make ‘Middle of Nowhere.’ I’m really interested in the inner lives of women, particularly black women, and showing women as fully dimensional, nuanced, complex characters. And I just love love stories, particularly black love stories.”

DuVernay made her film debut with the critically acclaimed hip-hop documentary “This Is the Life.” She went on to create many other renowned films, such as “I Will Follow,” and network music documentaries, such as “My Mic Sounds Nice” and “Faith Through the Storm.”

Although DuVernay graduated from UCLA with an English literature degree, she jump-started her career in film as a publicist.

“I was a film lover; I never thought I could be a filmmaker,” says the ex-rapper with Figures of Speech. “I always heard people say, ‘Get a job doing something you love.’ So, I became a film publicist and I loved it.

“When I was on the set with all these directors, I started to kinda dig what they were doing, and I thought I might be able to do that. So I started writing scripts, making shorts, documentaries and features.”

DuVernay has more than 12 years as a film publicist under her belt. She has done publicity for more than 100 movies and TV series, ranging from “Spiderman 2” to the ABC Family TV series “Lincoln Heights.” DuVernay is also the founder of AFFRM, the African-American Film Festival Releasing Movement.

As a part of the promotional tour for “Middle of Nowhere,” DuVernay and Corinealdi recently visited Howard University’s School of Communications for a discussion and screening of extended clips.

“The movie looked interesting, and it really captured my mind,” said Ashley Holey, who is pursuing a master’s of fine arts in film. “Ava definitely inspires us that it can happen for another African-American woman, like myself.”

Olivia Pearson, a sophomore film major, said: “It’s beautifully shot, and the story line is very intriguing. I haven’t been to the movies lately. I figured this is like one film that I’m willing to spend money on — not just because it’s a black film, but also because the story line is not your cliché lovey-dovey film. It definitely reflects reality.”

Following the presentation, DuVernay answered questions and offered advice to the aspiring filmmakers and scriptwriters. Pearson welcomed the writer-director’s advice on being open to last-minute adjustments and ideas from other people. “She made it seem like it was okay to switch up things.”

Ashley Holey, a graduate film student, was interested in DuVernay’s perspective on character development. “You really do have to get into their world,” Holey said. “That’s one of the things I’ve been struggling with as a scriptwriter, so now I can go back and really engross into scriptwriting a little differently.”

“Middle of Nowhere” arrives in theaters on Oct. 12.

Howard University’s Department of Radio, Television and Film is co-sponsoring the D.C. premiere of “Middle of Nowhere” at 12:30 p.m. Friday at Regal Gallery Place in Chinatown. Omari Hardwick, who portrays Ruby’s incarcerated husband, will participate in a screening and discussion at 5:10 p.m. Saturday and then introduce the 7:30 p.m. showing. Here are locations in other cities.