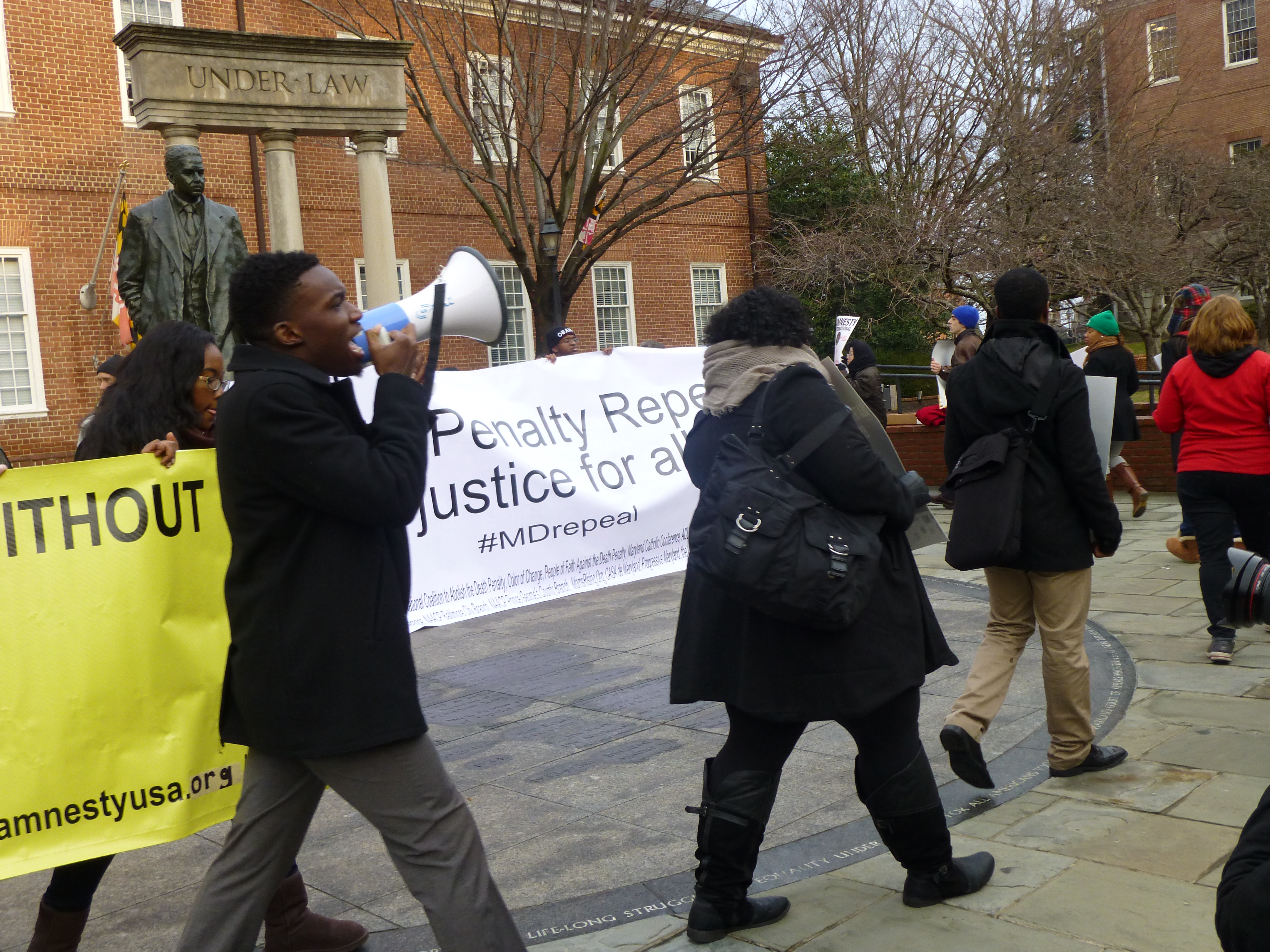 Death Penalty Vote in Maryland Is a Win for Students

College students traveled by bus to the Maryland Statehouse in Annapolis recently to protest one of the nation’s most controversial issues — the death penalty — and their efforts are beginning to pay off.

Their lobbying and rallies, along with debate among lawmakers, led to a 27-20 vote by state senators on Wednesday to repeal the death penalty in Maryland. The issue will now go before the House of Delegates and possibly voters.

“There is no greater human rights violation than a state having the power to execute a citizen,” says Jiva Manske, who has been a field organizer at Amnesty International for almost three years. “If we are going to work for social justice, we must end the death penalty.”

Amnesty International, which works to protect human rights, and the Howard University chapter of the NAACP were the main organizers of the student trip to Annapolis.

“The NAACP has always been behind eliminating the death penalty,” said Briaunna Savage, secretary of the student chapter, citing the Troy Davis case.

The state of Georgia executed Davis, an African-American man, in September 2011 for the 1991 murder of a white police officer. Protests occurred around the world, as many believed there was overwhelming doubt that he committed any wrongdoing.

“Howard really got involved when the case of Troy Davis came around,” Savage said. “We were really pushing reasonable doubt. Unfortunately, he was still executed, but we have been pushing this issue ever since.”

Within moments of stepping off the bus at the Maryland Statehouse earlier this semester, students snapped photos holding various posters and signs, quickly discussed the agenda for the long day ahead and walked over to the Thurgood Marshall Memorial just feet away.

Stanford Fraser, a native of Bowie, Md., wasted little time getting into action. Fraser, a senior history major at Howard University, grabbed a megaphone and immediately began leading the rally. He encouraged demonstrators to chant as they circled in front of Marshall’s bronze statue.

“They say death row. We say hell no!”

Various speakers shared their personal stories, concerns and what they hope to gain from seeing Maryland lawmakers repeal the death penalty.

One speaker was Erricka Bridgeford, a Baltimore native, who described her brother’s murder in 2007. Bridgeford firmly believes that the death penalty solves nothing and “just appears to be justice.”

“You start to realize that revenge is starting to take up space that you need to heal,” she told the crowd.

Other speakers  included Marty Price, who lost his stepfather and stepsister to homicide; Vicki Scheiber, whose daughter was murdered; and Bonita Spikes, whose husband was gunned down at a convenience store.

Since the reinstatement of the death penalty in Maryland in 1978, five men have been put to death, with the last execution being in 2005, according to Nonprofit Quarterly. Two people, Kirk Bloodsworth and Shujaa Graham, narrowly escaped death.

In 1985, Bloodsworth was convicted of killing a 9-year-old girl and sentenced to death, according to the website for Witness to Innocence, an organization that gives individuals exonerated of crimes the opportunity to tell their stories and spread the word about flaws in the justice system.

The Maryland Court of Appeals threw out his sentence the next year. However, Bloodsworth was retried and convicted, receiving two consecutive life sentences. After eight years, he was released from jail in June 1993 after DNA evidence proved his innocence. Witness to Innocence states that he is the first American death row inmate to receive exoneration with the help of DNA testing.

Shujaa Graham, a native of Louisiana, also discussed his ordeal during Lobby Day. Graham was sent to prison at the age of 18 in 1969 after being arrested for a $35 robbery he did not commit. According to the Innocence Project, Graham returned to prison in November 1973 after being convicted of murdering a prison guard. He received the death sentence in 1976 and was exonerated in 1981.

“I am not here because of the justice system,” Graham said to the crowd, as he fought back tears. “I am here in spite of it. When I left prison, I promised I would fight this!”

If lawmakers pass House Bill 295, known as the “Victim Appropriation Bill,” life without parole would be the harshest sentence an individual could receive. The bill would require money typically spent on executions be set aside for the families of homicide victims.

Update: The House of Delegates voted to repeal the death penalty on March 15, 2013.