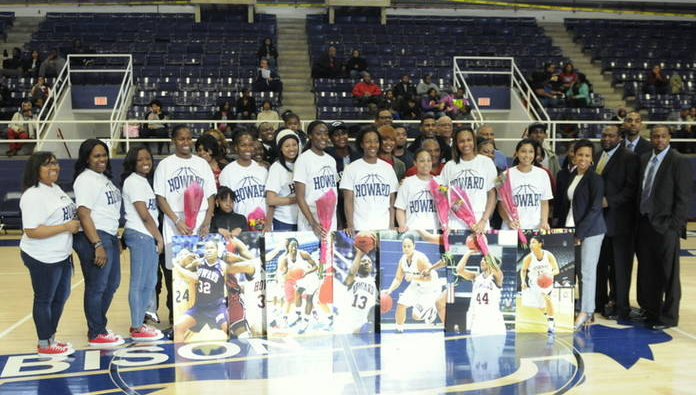 Contributor
Add comment
3 min read
In an atmosphere replete with mixed emotions, seven Lady Bison seniors played their final game in Burr Gymnasium Saturday as they each contributed to a 65-38 victory over Delaware State.

Afterward, Howard head coach Niki Geckeler adjusted her lineup by starting both O’Neal and Walton, leaving five seniors on the floor to begin the game.

O’Neal and Walton scored the game’s first seven baskets as they both combined for 14 points and 6 rebounds.

After an early 13-7 lead by Delaware State, Saadia Doyle took her first shot attempt with 10:41 remaining to start a 20-2 run by Howard.

Doyle scored six consecutive points as she and seniors Kara Smith and Portia Deterville contributed on the scoreboard throughout the run as well.

Imani Bailey capped off the run with a three-pointer to extend the lead to 12, making the score 27-15. Bailey, one of three Bison players in double figures, ended the game with 11 points as she showed the graduating seniors how capable she is to fill the shoes they would leave behind.

Led by Cheyenne Curley-Payne, Howard went on a 11-2 run to begin the second half.

Team steals were key to Howard’s victory as the team scored 46 points off turnovers compared to only six by Delaware State.

“I just took it back to my high school days by telling myself to go out there and have fun and do the best that I can for the team,” said O’Neal, who had a career-high 11 points, three rebounds and one steal.

With 42 seconds remaining, Nicole Deterville knocked down a three-pointer to end the game at 65-39.

“I wish it went to quadruple overtime,” said a laughing Doyle. “It’s always great to go out with a win. To have this being my final home game is amazing, so I’m glad we got the victory tonight.”

Doyle not only ended her final game in Burr Gymnasium with 17 points, 8 rebounds and 5 steals, but also wraps up her career as Howard’s all-time leading scorer, passing Alisha Hill earlier in the season.

“I hope I keep [the record] for a while, but I hope I stay around long enough for someone to break my record,“ Doyle said.

The Lady Bison ended their scintillating season at 18-0 overall and 12-4 in the Mid-Eastern Athletic Conference.

While the Lady Bison look to compete in the MEAC Tournament, Doyle sums up their objective in one word: Domination.  “Winning the championship is our goal,” she said.

As Doyle, Curley-Payne, Smith, O’Neal, Walton and the Deterville sisters reflect on their journey at Howard, they each look forward to accomplishing what every senior dreams of — going out on top.

“I’m very grateful for the opportunity to wear this jersey,” Doyle said.

Khari Arnold is a sports editor and reporter for 101 Magazine.