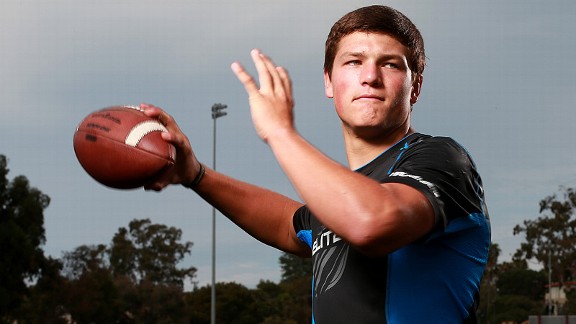 Penn State brings in a top quarterback in Christian Hackenberg.

National Signing Day (NSD) brings the drama, excitement and optimism that college football fans miss each year as soon as the off-season begins. While NSD 2013 had few surprises, it may be remembered as the day that shifted the college football landscape.

Traditional powers will likely always get good players, but the depth of their classes is what sets them apart this year. Penn State, which is dealing with the repercussions of Jerry Sandusky’s atrocities, brought in a top quarterback in Christian Hackenberg. However, the majority of the class isn’t nearly as impressive. Stanford, whose recent classes have really impressed, wasn’t included in many of the top recruiting services’ top 25 rankings.

Although Oklahoma brought in a respectable class, it is widely considered not to be top 10 caliber.  Keith Ford, who brings even more talent to an already deep Oklahoma backfield, highlights the class of 2017.

The Sooners arch-rival, Texas, also fell off a bit. The Longhorns, who typically reel in big-time hauls by the time Junior Day concludes, will welcome a small class featuring several talented offensive linemen highlighted by Kent Perkins—a player who could crack the depth chart once he arrives in Austin.

The big surprise of the day, however, came from Oxford as top recruit Robert Nkemdiche chose to join his brother Denzel and play for the Rebels. As if the No. 1 defensive end wasn’t enough, Ole Miss added top position players in wide receiver Laquon Treadwell, offensive tackle Laremy Tunsil and safety Antonio Connor. The class is further bolstered by Lavon Hooks, a 6-4, 295-pound defensive lineman. Some consider Hooks, a prospect from Northeast Mississippi Community College, as the top junior college (JUCO) player this year. Hooks will look to follow in the footsteps of other JUCO transfers to the SEC like Terrence Cody (Alabama/Baltimore Ravens), Nick Fairley (Auburn/Detroit Lions) and John Jenkins (Georgia).

Another big surprise was Vanderbilt, whose record haul was a bit overshadowed by Ole Miss’ performance. Many top recruiting services ranked the Commodores class in the top 25 by  with standouts like offensive lineman Delando Crooks, defensive tackle Jay Woods and linebacker Zach Cunningham of Pinson Valley, Ala.

Kevin Sumlin’s success with the Aggies has really translated off the field as Texas A&M brings in a solid 2013 class. Most intriguing about this class is how they’ve leveled the playing field for Texas prospects with the Longhorns. In fact, their top commit, receiver Ricky Seals-Jones, was a former Longhorn verbal commitment.

Out West, UCLA was the big surprise. Head coach Jim Mora caused some controversy early on in his tenure but one can’t dispute the talent he’s got coming in. Several defensive backs rated four-stars or better head the class, including 6-2, 190-pound cornerback Priest Willis, safety Tahaan Goodman of Rancho Cucamonga, Calif., as well as safety Tyler Foreman. There are five four-star offensive linemen (rated by Rivals.com) like Poasi Moala or linebacker Isaac Savaiinaea, a pleasant NSD commit for the Bruins.

Despite the changes in recruiting trends across the college football landscape, some powerhouse programs reasserted their dominance.

LSU will again lose some top defenders to the NFL draft this offseason. Recruiting coordinator Frank Wilson added some serious talent on that side of the ball with defensive linemen Frank Herron, Greg Gilmore and Tashawn Bower. The best prospect on that side of the ball still may be cornerback Tre’Davioius White, a Louisiana native.  The Tigers also bring in a physical group upfront with offensive linemen Josh Boutte, Andy Dodd and Ethan Pocic. Quarterback Hayden Rettig from California caps off a very good class for the purple and gold.

Ohio State arguably had the best class in the land as Urban Meyer continues to build the Buckeyes into the next big power in college football. Percy Harvin helped Meyer’s successes at Florida during that dynasty. Jalin Marshall, an in-state receiver for the Buckeyes, has drawn many comparisons to Harvin and is expected to have a similar impact in Columbus. Meyer complements great in-state talent with elite prospects from all over the nation in Georgia safety Vonn Bell, running back Dontre Wilson Desoto, Texas, and linebacker Mike Mitchell of Plano, Texas.

If anyone were to challenge Ohio State for the recruiting title, it would be Alabama. The rich get richer as the Crimson Tide commitment list reads as a section of the finest, most expensive items on an elegant, restaurant menu: Reuben Foster (linebacker), Derrick Henry (running back), OJ Howard (tight end), Jonathan Allen (defensive end), A’Shawn Robinson (defensive tackle). Nick Saban no longer recruits, but rather he picks and chooses as he has done a phenomenal job turning blue chip prospects into the who’s who of NFL prospects, picking up a few national championships along the way. Quarterback Cooper Bateman, receiver Robert Foster, defensive end Dee Liner and running back Alvin Kamara round out yet another excellent ‘Bama class.

Under Charlie Weis, Notre Dame had the talent, but they were always plagued by the P-word: potential. Now, head coach Brian Kelly can coach the talent and he does one hell of a job going out to get it. It’s hard to type Manti Te’o’s name without cracking a smirk, but all invisible girlfriends aside, he will be a tough player to replace. For the Fighting Irish, NSD gave them a player who will go a long way in trying to do that in elite outside linebacker Jaylon Smith. Kelly really flashed the ability to recruit nationally, too, pulling in prospects from 15 different states in addition to the District of Columbia. Other notable commits include defensive back Max Redfield and defensive tackle Eddie Vanderdoes.

Other big-name recruits who signed on NSD include Derrick Green to Michigan; Carl Lawson to Auburn; and Vernon Hargreaves III and Kelvin Taylor, son of former All-Pro Jacksonville Jaguars running back Fred Taylor, to Florida. A major prospect to look out for in the fall will be Philadelphia product David Williams, who will be in the mix to replace Marcus Lattimore at South Carolina.

Glynn Hill covers sports for 101 Magazine and is sports editor of The Hilltop at Howard University.