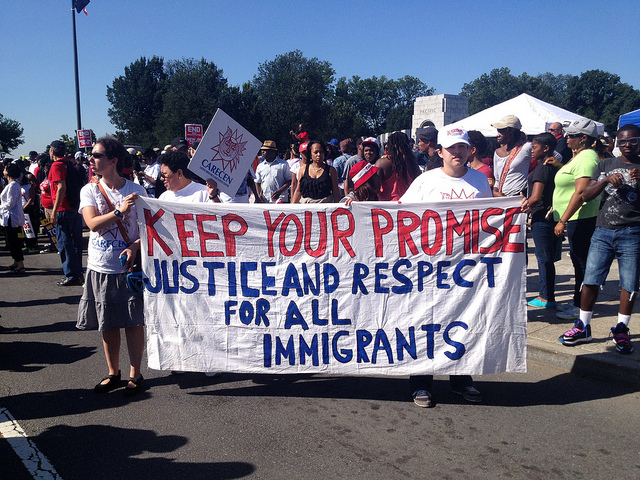 At March on Washington, New Beginnings, Memories and Second Chances

At the 50th anniversary of the 1963 March on Washington, the Washington Monument stood in braces as an ironic backdrop to the fractured yet healing state of Martin Luther King’s dream of America.

Though the march was originally designed to advocate for job equality and freedom, the array of causes and sources of motivation present on Saturday varied from women’s equality to human rights for homosexuality to the still tender ruling in the Trayvon Martin case.

For some, it was a first time experience. Jessie Smith, president of the NAACP chapter at the University of Houston, possibly stood in the exact same spot as his late grandparents when they marched in 1963. He held a “Justice for Trayvon Martin” sign, an eerie comparison to the Medgar Evers case his grandparents could have marched for 50 years ago.

For others, it was a sentimental return visit. March ceremony speakers Nancy Pelosi and U.S. Rep. John Lewis both recounted their experiences during the march 50 years ago. Freedom Fighter Joan Trumphauer Mullholand, who attended the 1963 march, notes the differences between the two events.

And for Walter Small, a volunteer for the National Action Network Volunteer, which convened Saturday’s march, it was a chance to redeem his opportunity to take place in history. Small was in the eighth grade in 1963. His older brother was in the 10th. His mother, who was friends with Rosa Parks, only allowed Small’s older brother to go to the march. She feared it would be too dangerous for the eighth grader to attend.

Ironically Small says, “I ended up staying home to play baseball and ended up breaking my leg.”

Smalls went on to become one a few African-American military officers of his time. His fight to become a major in the U.S. Air Force caused him to begin investigating and advocating against the unfair and disparate promotion rates among African American soldiers.

When Small received word of the 50th anniversary march, he knew how important it would be for him to participate. “When something like this is brought to your doorstep, you can’t ignore it.”

On Aug. 24, 2013, thousands filled the Mall from the Lincoln Memorial to the Washington Monument, which is being restored in the aftermath of the 2011 earthquake. The state of the monument is much like the words of Houston student Jessie Smith:

“With the [issues with] voting rights and in the wake of Trayvon, America is getting closer to Dr. King’s dream but we still have a long way to go.”