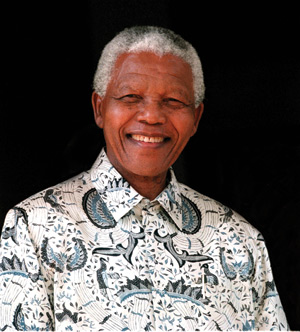 Nelson Mandela changed the face of not only South Africa, but also the entire world, as we know it today by helping to organize the first movements against apartheid. The 95-year-old leader devoted his entire adult life to bringing equal rights to his African brothers and sisters in South Africa.

Mandela was battling health issues, which finally got the best of him while he was in the company of several members of his family. The world has been paying tribute to him since his death on Dec. 5. Born in 1918, Mandela has been lying in state for a three-day period this week, including a memorial service on Tuesday. He will be buried on Dec. 15 following a state funeral.

In the United States, mourners have been visiting the South African Embassy in Washington and an exhibit at Howard University in his honor. The exhibit, “Nelson Mandela: Character, Comrade, Leader, Prisoner, Negotiator, Statesman,” will be on view at the Moorland-Spingarn Research Library Gallery through April 27.

“Without Mandela’s work and dedication to serving mankind, we as African-Americans would not be where we are today,” said Taylor Faulkner, vice president of Alpha Kappa Alpha Sorority Inc., Alpha Chapter, which partnered with Africare to hold a candlelight vigil on the Yard at Howard University.

“He was a very humble and genuine person who truly was a blessing to the world,” Faulkner said. “I thank him for dedicating his life so that we can live in a world of equality and justice.”

Brandon Avery, an analyst for the U.S. Marine Corps who is based at Fort Sheridan Joint Military Reserve Center in Illinois, said that “the loss of Nelson Mandela is the loss of the father figure for the South African freedom movement to end apartheid.”

“Mandela will be seen as the father of South Africa and one the world’s greatest leaders — not only due to his ability to endure unjust treatment and end a systematic process of discrimination against the people, but he will also, and most importantly, be seen as a civil rights leader who was able to embrace those who once antagonized him,” Avery said. “It is because of these shapes of Nelson Mandela that he will go down in history as one of the greatest leaders to ever been thrust into a global prominence.”

Many leaders and entertainers around the world pay their respects to a man many regard as an angel that walked this planet for nearly a century. “Truth is, he’s a saintly man but a very tough and loyal politician,” former U.S. President Bill Clinton said during an ABC News interview. “And he was a great president.”

“He was unbelievable,” Clinton added as he described Mandela’s support during his 1998 impeachment over the controversy involving former White House intern Monica Lewinsky. When I was going through all of this, he came to the White House and defended me. Told the White House they should leave me alone.

“I said, ‘How did you ever let go of your hatred?’ He responded, ‘Briefly I did, but when I was walking out of my compound for the last time, I said they hated you for the last 27 years and if you still hate them they still have you. If I wanted to be free I had to let it go. And so should you.’”

Before his death, Mandela was able to see the new film of his life starring Idris Elba. “When we first showed Mandela the movie, the first thing he said was, ‘Oh my goodness, is that me?’” director Justin Chadwick recounted during a screening of “Mandela: A Long Walk to Freedom.”

“That’s when we knew we had done a good job,” Chadwick said. “It was an honor to be able to capture the life of such a historic figure.”

Although Nelson Madiba Mandela no longer graces this planet, we know his legacy will never be forgotten. He has impacted the lives of millions of men, women and children around the world who are forever grateful for his servitude, courage and bravery that he exemplified daily. He has inspired millions to be better not just for themselves, but also for everyone with whom they interact with. For that, we are eternally thankful.

“As we let our own light shine, we unconsciously give other people permission to do the same,” Mandela once stated.

Many people have vowed to follow the example set by this extraordinary human, and I plan to do the same. I will take the life lessons he taught and hope to become an iota of the man he was.