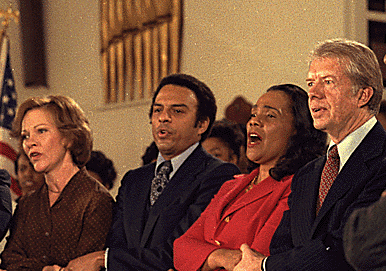 What About the Women Behind Men of Civil Rights Era?

When imagining the battlefield of civil rights, people often see men. Martin Luther King. Jesse Jackson. Malcolm X. What about the women behind those men?

Brendien Mitchell, a member of the College of Arts and Sciences Student Council, had the same question and became the mastermind behind Howard University’s recent Black History Month program on King’s wife, “What About Coretta?”

“While discussing ways to celebrate Dr. King’s holiday with other members of COAS student council, I came to realize that attention has always been focused on Dr. King and his contributions, but rarely on the work of his wife, Coretta King, and all that she carried on after his death,” Mitchell explained. “This program creates the perfect opportunity to encourage young people to become more active in the current gender movement today.”

Mariah Sankey, a junior from Opelika, Ala., served as the moderator for the event. “Being born in the South, I often hear stories of the struggles in history that the black race and black women have had to overcome,” Sankey said.

It can be argued that African Americans forget how far they have come as a race and become complacent with what they believe is a changed society.

“It is important to continue programs like ‘What About Coretta?’ to continue to remind ourselves that there are still fights to be won, especially in the issues of women rights and equality,” Sankey said. “We must remember that it is our duty as members of the black race to take initiative and truly become the change we wish to see.”

Danielle Scott, chief of staff of the Howard University Student Association, held a seat on the event’s panel.

Kevin Peterman, student council vice president, says men must stay informed and do research on the issues of women rights, because such inequalities affect more than just women.

“As a male, I too must stand for the rights and advancement of women, especially in all-male spaces where the woman’s voice is unheard,” Peterman said. “The glue holding the black race together has always been the black woman and when we advocate for them, we advocate for our future.”

“Honestly, I was never too concerned about such issues until other young people began to educate me,” Mitchell admitted. “I felt that society failed to discuss the prominent roles of women, especially at Howard University, where the only thing discussed in regards to women is the student body ratio. It was time to change that.” Mitchell is also one of three fellows in the national Young People Fellowship, which engages students in grassroots projects focusing on social change.

As the program on Coretta Scott King went on, the panelists stressed the importance of teaching and exposing generations at an early age in order to influence their thinking on such issues and instill accurate values of equality. Older generations must be OK with change, they said, and the new generations must step up and change what has been done in the past. Women deserve the same respect given to males, whether it is in the workplace, in leadership positions or in the media, panelists added.

“The issue of women’s rights has come to the forefront once again in the American political sphere,” Mitchell said. “I believe that we, as African Americans, have become disengaged or not as concerned as others. As Howard students, and the black community as a whole, we must lead in social change.”