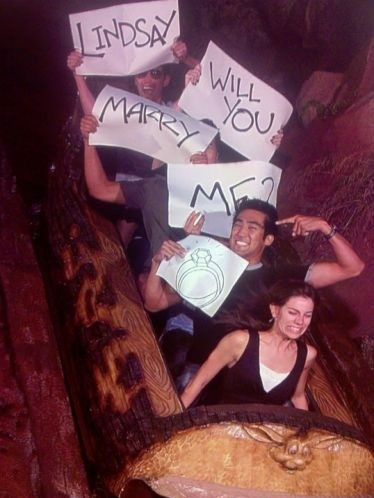 Wedding Proposals That Made Her Say, ‘Yes!’

A defining moment in a couple’s lives is traditionally made on a bended knee by the well-dressed gentleman; a romantic gesture that if accepted by the lady initiates an engagement and hence a lifelong commitment of marital bliss. Below, watch the various styles of wedding proposals that begin a couple’s new journey together.

The Public Proposal: All Eyes On You

Public proposals are a very bold choice. Anything can happen, so it is important to have complete confidence. Not only do you want to impress the woman you are proposing to, but also the strangers who will be watching and, in this day and age, most likely recording, too.

During halftime at an Orlando Magic basketball game, three women were brought to the middle of the court to play a musical guessing game. What one of the women did not know, was that the entire halftime show was staged to lead up to a flash mob performance proposal to Bruno Mar’s “Marry You” in front of the arena of fans.

On the nationally syndicated morning program “Today Show,” a young woman expected to be interviewed by co-respondent Al Roker about her non-profit organization, Women’s Housing and Economic Development Corp. Eventually, her boyfriend (who also happens to be her business partner), came onto the scene, grabbed the mic from Roker, professed his love and proposed. Although it was not the most idyllic romantic proposal, it sure took some guts to propose on live television in the middle of Rockefeller Plaza.

The Intricate Proposal: It’s Worth Every Detail

Intricate proposals take the most time and preparation. Although time consuming, just the thought of all the hard work you put into the planning will give her no choice but to say, “Yes.”

Scavenger hunts require patience for all parties involved. Sometimes people take an easier route and keep the hunt all in one area. Not this proposal. The young man did not mind making his girlfriend work. She journeyed through cafes and parks to finally reach the beach where a wedding proposal awaited her. Little details of the hunt made all the difference, from his involvement of her friends to the heart-shaped, handwritten clues.

A young man creates a trailer-like video, titled “Make the Movies Jealous,” that plays during the previews at a movie theater in which his girlfriend is seated. Instead of seeing “Hangover 3,” the girlfriend watches the man ask her father’s permission to take her hand in marriage.

The Humorous Proposal: Laugh a Little

Dare not to underestimate funny proposals. Depending on your special lady’s sense of humor, this proposal can be fun to plan and even funnier to watch unfold. Just make sure to do something she will find funny. Remember, the proposal is meant for you to bring out her best curve — her smile.

Imagine the shock she will feel when she asks to see the photo after the ride. Having everyone being in on a joke is one thing, but when a proposal is in sync, the amazement is sure to follow.

Voluntarily falling off a building as a practical joke is not something the common man would think of as a wedding proposal. Luckily, an air mat was perfectly in line for the young man who pretended to fall to his death in front of his girlfriend before he proposed. Right before the fall, he made it obvious he was ready to pop the question. After the fall, she leaned over to see him holding a “Will you marry me?” sign.

The Intimate Proposal: Just the Two of Us

As you’ve witnessed, wedding proposals can be done in a variety of ways. But, when all is said and done, the traditional way of proposing, we all know and love, never goes unnoticed. A private, intimate proposal can create the perfect atmosphere for just the two of you.

Never forget: Less is more. A candlelight dinner below a star-studded sky can woo her over in seconds. The location of the proposal makes all the difference. A serene setting can provide your proposal with a backdrop that creates an unforgettable evening.

Include certain elements in your proposal, like music. If she enjoys music, take her somewhere where live music is played. Ask a musician to play her favorite song. It is simple, sweet, and the intimacy of the moment will make the proposal special enough for the both of you to enjoy.

Conceived and edited by Naomi Venerable.