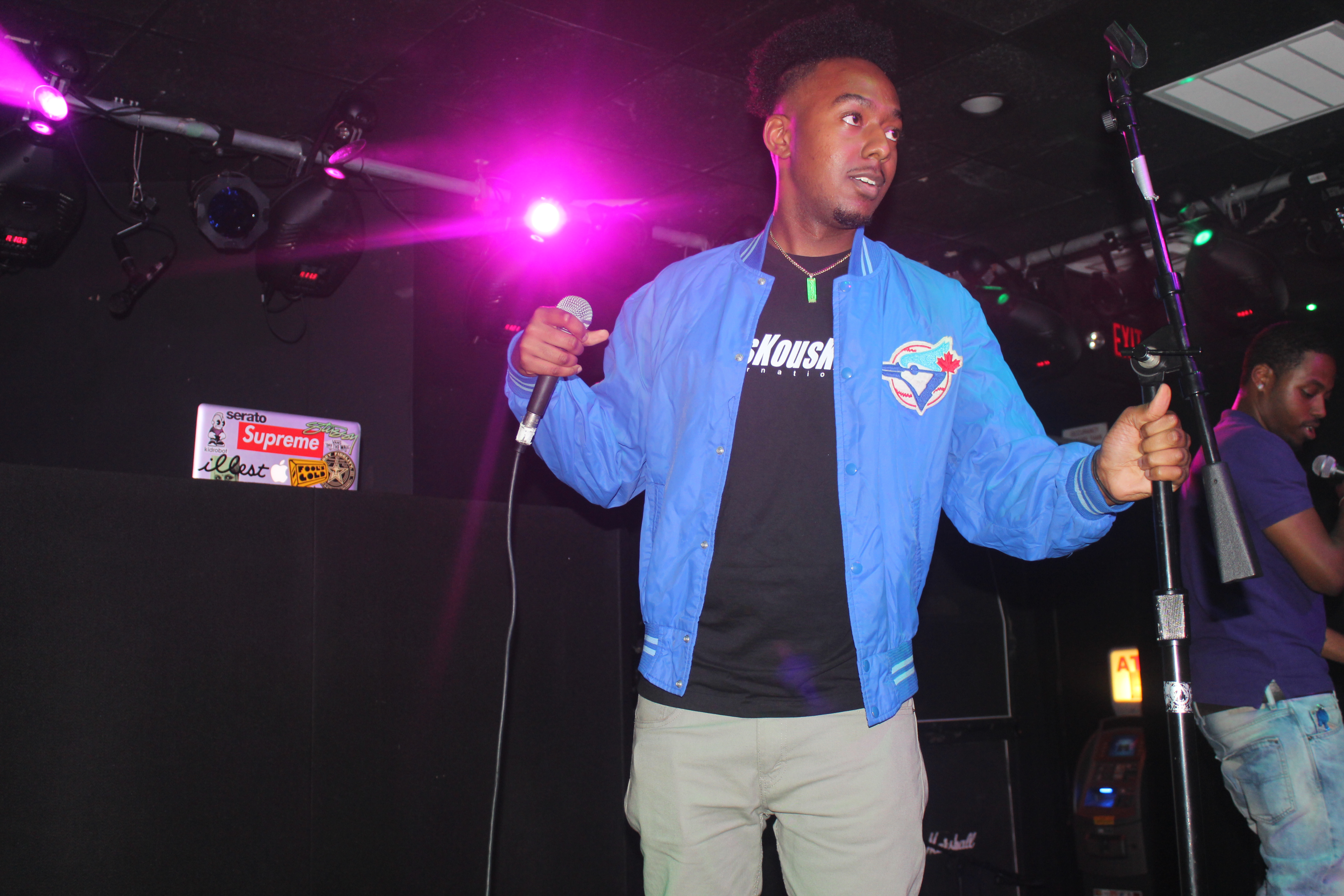 A Land Before Time: An Artist Undiscovered

Odelle George-Perreira is not your typical college student. While the 23-year-old strives to maintain a 3.8 GPA as a business management major, he believes his actual desires are quickly slipping through his fingertips.

Odelle Kent Toriano George-Perreira, also referred to by his stage name as Capital Ode or Ode, is an underground hip-hop artist born in Toronto. His background, childlike wonder and afrocentricity influences his sound and lyrics.

Although Capital Ode works hard to perfect his music, he feels as if he never has enough time. His current project, “A Land Before Time,” expresses his belief that time is not on our side.

“I notice he’s a little anxious,” Mouse Sucks said nodding his head. “It’s more of a mental thing. He’s going to set a date for himself and get worried when the date comes and he doesn’t have anything.”

Capital Ode agrees with his brother. “I always feel like time is running out,” Capital Ode explained. “I’m in school now — about to graduate. Adults always tell you ‘have a back-up plan,’ but they never tell you that all that money you invested in your back-up plan could have been used towards your actual plan.”

Capital Ode has been at Berkeley College for three years. Music has not become an everyday thing as of yet. He barely releases any music or videos because he feels as if he does not have the time to commit to it. He is taking four classes at Berkeley, does his homework and studies every Sunday, and works on the weekdays as an office assistant and event planner at his school.

That love began in Toronto when he began listening to the music of a popular ’90s R&B group from the U.S.

“As a little kid in Toronto, I loved R&B,” he said with a smile. “That and reggae are big in Toronto. My favorite group at the time was Dru Hill.” He laughed again while thinking of the racy lyrics Dru Hill used to sing. “I shouldn’t have had it [their albums], but I loved them.”

Mouse Sucks laughed as he recalled a fond memory of his brother when they lived in Toronto. “It’s actually a funny story,” he said. “I remember walking into his room, and he was listening to Dru Hill, singing all the words,” Mouse laughed while he mocked his brother lip-synching to Dru Hill.

It was not until Capital Ode heard Dru Hill’s second album, “Enter the Dru” that he fell in love with hip-hop.

“I heard Method Man for the first time and heard the things he was saying. There was singing and all of a sudden — breakdown, Method Man is coming,” he said with awe in his eyes. “It sounded amazing to me and I liked the way his words were put together.”

Ever since he heard that song, he has been listening to hip-hop and dissecting it as an art instead of as just rap music. “Nothing brings me to life more,” he stated with assurance.

He has become so passionate about his craft that he even chose a funeral song.

“If you play ‘It Ain’t Hard to Tell’ by Nas at my funeral, I will jump out the casket and rap every word,” he said.

His friends say he has grown into a great artist and a down-to-earth guy. Alphonzo Lane, 24, a producer from Queens, New York, also known as Drum Fu, has fond memories of how he first met Capital Ode.

“We met in ’09 or 2010 while at an open mic,” Drum Fu said. “Ode and Mouse were the only two people that went on stage and had any type of talent.” Drum Fu explained that Capital Ode was performing one of his most successful songs, “Success or Death,” and compared his vibe to Andre 3000’s.

“I knew I needed to work with him,” Drum Fu said. From there, they exchanged contact information.

“He’s not afraid to be himself,” Drum Fu said. “He’s going to make the songs he wants to make and doesn’t conform to what everyone else is doing.”

An old high school friend, Sherlita McCann, 22, from Orange, New Jersey also had a great first impression of Capital Ode, or as she knew him, Odelle George.

“He was the only kid in high school with a high-top fade,” McCann said. “He had a pretty loud and strong appearance.”

He became a good friend at Orange High, and she later admired him as an artist once she discovered his talent.

“My first impression of his music was on Myspace,” McCann said. “His lyrics flowed in a way that was different. It wasn’t just rhyme, but a story.” That same story-style rhyming is evident in his music today.

“Seven years ago, the content wasn’t as strong,” she said. “The focus changed, and there were more stories,; more articulation,; different techniques and alliteration.; it really brings the ‘ping’ to his sound,” McCann said describing her own perspective of his progression as an artist.

When describing his delivery, McCann noted that when she shared his music, people would compare him to Andre 3000.

“His lyrics vary from afrocentricity, love, lust, parenthood, music, and whatever he can think of,” McCann said. “When it comes to just being ‘good people’ nobody does that better than Ode.”

Instead of trying to keep up with the popular culture of hip-hop, he is just moving at his own pace in what he calls the “Capital Ode lane”.

“I’m trying to do what makes me happy. I’m not going with the flow of new, but just developing my own sound — like, what separates me from everybody else; what makes me Ode,” he says pointing to himself.

Normally, travelers have a fun and exciting life exploring the world and discovering some untold wonders, but it’s a different story for Capital Ode.

“I’m from Brooklyn, New York; by way of Orange, New Jersey; by way of Madison, Alabama; by way of Fort Lauderhill, Florida; by way of Ontario, Canada,” Capital Ode said smiling. Capital Ode’s constant moving has molded him into the person he is today, from his music to his personality.

He was born in Toronto and was only 10 years old when he made his first move.

“My mom went to visit a friend in Atlanta for vacation, and then she called my brother and me and told us she wasn’t coming back,” he said. Within a year, his mother moved to Florida and was staying with a family friend. Capital Ode had just finished the fourth grade in 2001 when his grandmother took him and his brother to visit their mother.

“She patted me on the leg and said, ‘You’re not going back,’” George-Perreira said reminiscing solemnly. From then on, he would be traveling from place to place with his family; never having the feeling of being permanent.

In 2005, they moved to Alabama where his mother got married.

In 2007, Capital Ode and his brother moved to New Jersey to live with his grandfather. In the summer of 2008, their mother moved to New York, and her boys followed when she found an apartment in Brooklyn. Ever since then, they have been living in New York, but moved around within New York from Brooklyn to Long Island and now Queens.

He smiles almost embarrassed and sits back in his chair. “I didn’t tell people I was an immigrant or that I was from Canada when I was younger because I was embarrassed,” he said. “When I lived in Alabama, there was a half-Mexican girl in my class and some classmates called immigration on her, but she was actually from California.”

Now Capital Ode raps with pride about every place he’s been and uses the lingo he learned from each place, which is portrayed in one of his songs called “Going Back Home.” In the song, he uses slang words from Florida and Alabama like “bout its” and “bamas,”, and even makes a reference to the New York Giants. The song pays homage to the places he’s been and how it made him who he is today, yet he still wishes to go back home to Toronto where he feels like he truly belongs.

McCann said Capital Ode’s lyrics describe everything that happened in his life. “If you aren’t going through anything, you lose the story,” she said. “The real artistry lies within a shared experience,” McCann said.

McCann believes that the industry is not ready for him yet, but she and his other friends believe he has the potential to make it. Drum Fu believes in his talent and says he is a great performer. Mouse Sucks said his brother’s sound is a natural element that grows into a monster. “It’s hard to explain, but it all comes together to form a great blend.”

But to Capital Ode, “making it” means something else.

“I’ve been on Internet radio, college radio, a couple of blogs; but I want to make sure it’s consistent and reaches as many people as I can. I haven’t even reached the 1 percent I’ve wanted to yet,” Capital Ode said.

He explains that he wants the same type of fans he sees in himself: those passionate kids who will be judgmental about music. “Making it would be getting those kids who dissect my music,” he said.

Capital Ode is working on multiple projects and setting up a studio in his apartment in Queens, so that he can make music his No.1 priority. He has a few singles such as “FRapping (Kill A Rapper),” “Black Coffee and Cigarettes” and. of course, “Going Back Home.” He is also starting a project with Drum Fu called “Perfect Hair Forever” and is still working on “A Land Before Time.”. To learn more about him, search “Capital Ode” on Twitter, Facebook, Tumblr, Instagram, Bandcamp, and blogs such as Pigeons and Planes.

Janelle Berry is a writer and editor for 101Magazine.net.