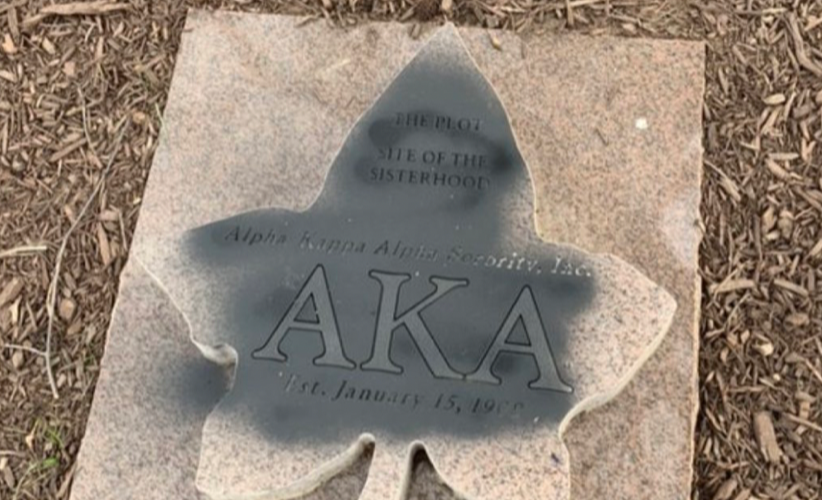 Malice, madness, and malignant behavior ensued late in the night on April 12 but it did not prevail. Several historic Greek fraternity and sorority plots on campus were defaced. As questions from the Howard community arose a silent storm took the campus by force.

An aroma of admiration and a distinct display of dignity surrounded the souls that stood outside resurrecting integrity to their respected plots. In shock and dismay, we all took to Twitter to voice our concerns and outrage. How could someone do this to our community?

In the dead of night, someone tried to steal away over a century of history that’s rooted firmly in the fabric of our campus. Throughout the years, families have made their pilgrimage to the Mecca to honor the lives and legacy of their founders erected at this precious institution of higher learning.

Pillars of purpose, power, and presence that are felt all across Black and Brown generations were intentionally sought after to shame. This violent attack comes at the brute of a turning point in our political history as a nation.

On Wednesday he tweeted, “Skull and Bones has lost their power. It’s now the sorority known as Delta Sigma Theta who is taking control of our country at all levels of govt. Even the Loudoun County Board of Supervisors Chairman is a Delta.”

Phyllis Randall is the current and first ever African-American woman to chair a county board in Virginia.

It’s ignorant tweets like those that have led many to believe these attacks were racially motivated. The defamation occurred less than a month after a series of bomb threats to our HBCU among others during Black History Month. The violent attack on Black Greek Letter Organizations is yet another disappointing distraction.

“It’s very hurtful, very disrespectful, there’s a lot of history,” said Spring 2022 Alpha Chapter initiate of Delta Sigma Theta Sorority Inc. Tahari Williams. “There’s a lot of people who came through these grounds who want to see us do well and want to see us serve and our tree is one of the many representations that we have on this campus to show that.”

Divine 9 organizations have a direct influence felt in cultures, classrooms, and communities across the globe. Howard University uniquely serves as the birthplace for 5 of the 9 sororities and fraternities that make up the National Pan-Hellenic Council.

“As a Howard alumna and proud Alpha Chapter initiate of Alpha Kappa Alpha Sorority, Inc. I am completely disheartened that this happened on the same yard where a lot of D9 organizations were founded. We honor our ancestors and those who came before us with our plots and trees and for them to be disgraced like that is deplorable,” said Nailah Roberts.

Though the trees were discovered early Wednesday morning, the Division of Student Affairs didn’t send out a statement addressing the matter until 6:00 p.m.

“The Divine Nine has a rich historical legacy, and many of our most esteemed alumni credit their affiliations with these organizations for empowering their success and service. These fraternities and sororities are foundational to Howard’s identity as an institution of higher education,” read the statement released by Vice President of Student Affairs Cynthia Evers. “We take these acts of vandalism very seriously and thank the many individuals who have reached out to express their care and concern. Howard University Police Department has launched an investigation of the incident, and the University will address this issue promptly.”

By this time, members of the organizations gathered in the name of sisterhood and brotherhood to rectify the issues on their own. Paint, purpose, and pride filled the Yard on that afternoon as historic plots were restored.

“Regardless of what happens, we’re always going to make sure that we take care of ourselves and this organization,” said Williams.

Over the last 5 decades, every Divine 9 fraternity and sorority has not just survived but thrived and all remain at the forefront of major historic accomplishments.

Alpha Phi Alpha Fraternity Inc. member Barry Jenkins recently won the Best Picture Oscar for directing Moonlight. Michael Jordan, a member of Omega Psi Phi Fraternity Inc. stands alone as the only Black majority owner of an NBA franchise. This is just to name a few legendary members and there are many more.

It is with the spirit of repair that we must embark on a collective journey to protect African American principles and institutions.