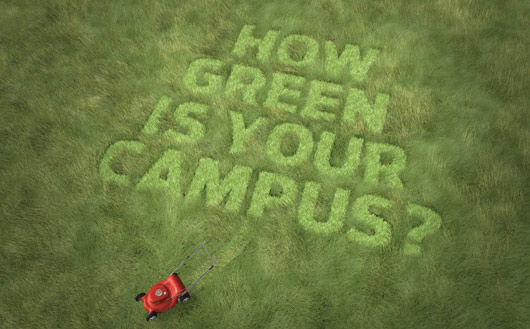 Green Campuses on the Rise in the U.S.

Besides the U.S. News & World Report’s college rankings, administrators now have to worry about their scores on Sustainable Endowment Institute’s Green Report Card. SEI’s annual report card is the “only comparative evolution” that ranks colleges and universities based on the institution’s commitment to eco-friendly initiatives, such as campus-wide recycling programs.

In addition to recycling, an increasing number of university administrators are also starting projects based on LEED, or Leadership in Energy and Environmental Design, criteria. LEED construction projects consist of buildings that are both energy efficient and utilize material non-hazardous to the environment.

With 60 projects under its belt, the University of Florida leads among American higher education institutions, according to a Yudelson Associates, a green consulting firm. (See Top 10 Universities With LEED Projects, below.)

But administrative programs are not the only means of spearheading environmental awareness among students. One way to education students is through informal discussions such as a lecture held on Howard University’s campus organized by the Alliance for Climate Protection, a non-profit organization aiming to cut greenhouse gas emissions and reduce the impact of global warming.

The lecture is the first of several “green” events to take place on Howard’s campus. The Howard Environmental Society plans to hold a Green Summit in January or February, and “Green Tomorrow,” a student organization founded by junior Jordan Rivers, plans to hold a round-table discussion with prominent environmentalists later in the spring semester.

At the informal lecture, climate change consultant Jeremy Richardson, Ph.D., told a small crowd of Howard students that he does not agree with using the term “global warming” in regards to climate change.

“I don’t like use the term ‘global warming’ as much as I like to use ‘global weirding,'” he said. “You see a lot of weird things happening now.”

The late November discussion was meant to help the audience members who filled Drew Hall’s lounge to “think globally, act locally.” Richardson’s lecture focused on the global impact of greenhouse gas emissions and what students and communities can do to address environmental degradation such as unsafe drinking water at a local level.

Throughout his lecture, Richardson used a slideshow based on “An Inconvenient Truth,” the documentary by former Vice President and Nobel Prize winner Al Gore, with updated information on recent events such as the Deepwater Horizon oil spill.

Richardson concluded his lecture by refuting climate skeptics’ major claim: There is no consensus among scientists about climate change. He countered that a majority of climate scientists have reached a consensus: Climate change is real.

Experts at the recent United Nations climate talks in Cancun, Mexico, debated effective ways to reduce the impact of climate change, but not its validity.

In the middle of the two-week climate summit, the “Cablegate” fiasco started by WikiLeaks, a non-profit organization that publishes classified documents, began.

The classified diplomatic cables released included the political maneuvering by the United States to pass the non-binding Copenhagen Accord. The cables concerning Copenhagen also included one that has the European Union’s president, Herman Van Rompuy, saying the Copenhagen talks were an “incredible disaster” and the subsequent Cancun summit would be a “failure” as well.

Kari Fulton, co-founder of Checktheweather.net and founding member of Youth Climate Action who attended with climate change summit, would agree with Van Rompuy’s assessment of Copenhagen.

Fulton, who also attended the summit in Denmark, said that negotiators believed a binding agreement on climate change would be reached before the meetings concluded. However, the talks ended with non-binding accord that failed to achieve “universal acceptance,” as Todd Stern, the U.S. Special Envoy for Climate Change, told an audience in Cancun.

During the climate change summit in Mexico, Fulton and Youth Climate Action partners made negotiators aware of the thousands of protestors blocked off from the conference.

“We had to bring the outside in,” Fulton said.

Some members of Fulton’s coalition members were escorted from the conference and banned from returning. But she said it was “important for us to let the world know that there are voices of dissent in the U.S.” against “false solutions” such as the Reducing Emissions from Deforestation and Degradation program, also known as REDD.

The United Nations’ REDD program is meant to help developing countries protect their natural resources and allow developed nations to assist them in reducing climate change caused by such practices as illegal logging and burning fossil fuels.

According to the UN’s official site for REDD, the program will create a “financial value for the carbon stored in trees” that “involves developed countries [the Global North nations] paying developing countries [Global South nations]” to maintain the forests while the former uses their assistance as a measure of reducing their emissions.

Critics of REDD argue that the program encourages the infringement of the human and land rights of indigenous people in developing nations. They also argue that creating a market to trade tree carbon is more complicated than necessary – allowing for the false emission reduction reports, as cases in EU countries demonstrate.

“There so many loopholes,” Fulton said, “and the devils are in the details.”