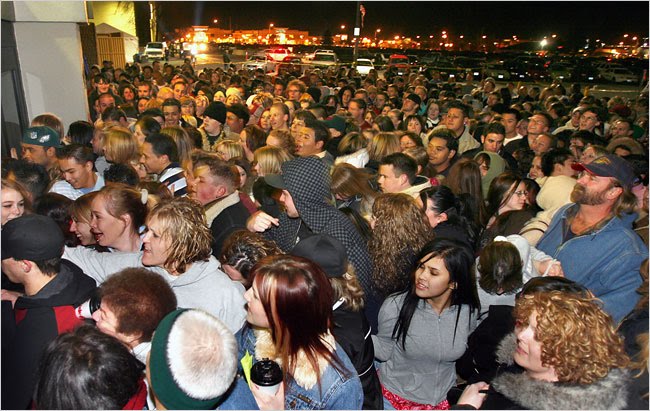 Grace is said, turkey is cut, dressing is passed, and laughter floods the room. Thanksgiving is a time of family, food, and thankfulness. The Friday following Thanksgiving is everything but that. Mayhem ensues as families across America wake up at the crack of dawn in preparation to nab the best of Black Friday sales. Coffee is poured in mugs, attack strategies are planned, tents are assembled outside stores and lines snake around the block.

“Depending on the store, you have to leave after thanksgiving dessert,” said Maricella Anderson a student at Johnson and Wales University Denver.

This is the reality of Black Friday.

With announcements by Target and Walmart to open their doors for Black Friday starting as early as 10 pm on Thanksgiving day instead of the normal 4 am, some customers are saying they will be skipping Black Friday this year.

“I probably will not do Black Friday this year because Thanksgiving is for family time,” says Alie Haywood a freshmen student at Xavier University of Louisiana.

Haywood isn’t the only one opposed to the stores opening earlier on Thanksgiving. Anthony Hardwick, a four-year Target employee, began a petition two weeks ago on the website Change.org after being informed he and his coworkers would be required to begin their shift at 11 p.m. the night of Thanksgiving for a 10-hour shift. After receiving over 190,000 signatures the petition was delivered to the Target headquarters in Minneapolis.

Perhaps the increased Black Friday sales hours could result in more time for shoppers and less of a safety hazard. In 2008, workers at Walmart were trampled as 2,000 shoppers stampeded into the store, shattering the door and killing one worker, 34-year-old Jdimytai Damour.

Many consumers around the United States have heard of Black Friday, which falls on the day after Thanksgiving, but new to the scene is Cyber Monday, which occurs the Monday after Black Friday. Dating back to 2005, Cyber Monday has begin to gain global prominence as most companies offer sales and promotions on both Black Friday and Cyber Monday, the difference is customers never have to leave their house to receive exclusive online sales by companies such as Amazon and Best Buy, and free shipping from most retailers.

Cyber Monday has been labeled as one of the biggest shopping days of the year and according to reports Black Friday sales have suffered in response to the rise of Cyber Monday.

“I’m new to Cyber Monday, but with stores planning to open on Thanksgiving I’d rather just shop online on Monday, “ says Kenny Garnett a student at the University of Maryland. “You get great deals and free shipping, plus I don’t have to deal with the madness of Black Friday.”

Cyber Monday is an alternative for people who hate the crowds, the long lines, gas consumption, and the mayhem that comes with Black Friday. Shoppers are also able to carefully plan out their budget because they are not as pressured by the surrounding environment to make impulse decisions.

Cyber Monday 2011 is expected to be phenomenal, as retailers realize that  in order to draw more customers, you must give them more for their money. CyberMonday.com is a top source for Cyber Monday deals from over 700 retailers.